What a crazy comeback win for OG. 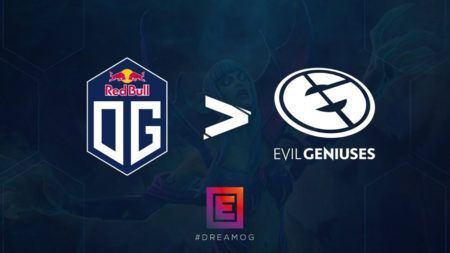 With OG and Evil Geniuses displaying lackluster performances during the group stages of Epicenter Major, both teams found themselves facing one another in the lower bracket in a tense best-of-one match.

Down 16,000 gold, OG knew they had to make a play, and it was Jesse “Jerax” Vainikka who made it happen. OG knew that EG was camping in their jungle, so they sent an Ember Spirit illusion into the top lane. Both Gustav “s4″ Magnusson and Artour” Arteezy” Babaev used their ultimates on it, which prompted OG to start the engagement.

Prior to the crazy clash at the 33-minute mark, OG could not fight EG head on, so they were forced to battle in different fronts, hoping to gain the upper hand.

OG’s mobile lineup with Ember Spirit and Nature’s Prophet was eventually able to out-farm EG’s core heroes. And with their own 15,000 gold lead, they marched down the middle lane and ended the game.

OG still has a long way to go if they want to get far into the Epicenter Major, but eliminating EG is a good start. OG is set to face Team Secret next in the lower bracket.

It is also important to note that OG is without their team captain, Johan “Notail” , who fell ill and is using their coach, Titouan “Sockshka” Merloz, as a stand-in.