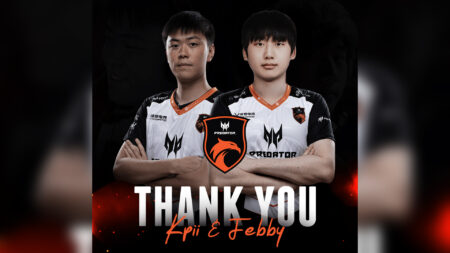 TNC has decided to make a significant change to its Dota 2 roster after being unable to qualify for the upcoming ONE Esports Singapore Major through the DPC Southeast Asia upper division.

Febby joined TNC at the start of 2020 as the team’s coach. After the TNC’s team captain Park “March” Tae-won was released by the organization last September, Febby moved to the active roster as the team’s position 5 support player and captain.

TNC’s 2019 roster with all five players reached a new peak for the organization when its Dota 2 roster won back-to-back ESL One Hamburg and MDL Chengdu Major championships at the end of 2019.

TNC came in fourth place with a 4-3 record during the DPC SEA upper division. TNC finished right behind Fnatic, Neon Esports, and T1 — three teams that made it into the Singapore Major.

TNC had a rough start to the DPC season when they were upset by fellow Filipino squad Execration 2-0 during both teams’ opening upper division match.

TNC bounced back with a 2-0 win over Vice Esports, but fell to Neon Esports 2-1 three days later during the second week of competition in the upper division. TNC then put together an impressive win streak by earning victories over T1, BOOM Esports, and 496 Gaming.

TNC was considered one of the favored teams to qualify for the Singapore Major from the SEA region following the roster’s impressive performances during 2019 and 2020. Unfortunately for the Filipino squad, they will have to wait until the second 2021 DPC SEA upper division season for a chance to earn more DPC points during the next Major.