The groups for Dota Summit 11 have been announced

The winner of Dota Summit 11 will qualify for the MDL Chengdu Major. 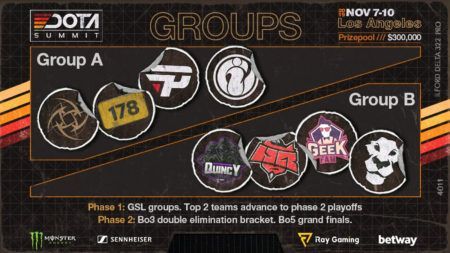 With the Dota Summit 11 DPC Minor set to begin in a few days, we now know the Group Stage draw for every team that will be competing:

After the post TI9 roster shuffle, teams scrambled to improve their lineups for the upcoming 2019-2020 DPC season.

While it’s hard to say for certain how the new rosters will perform, right now we see NiP taking Group A. The European squad is the only team in the Dota Summit 11 Minor that made it to TI9, and includes two previous TI winners in Peter “PPD” Dager and Saahil “Universe” Arora.

It’ll be interesting to see how Virtus Pro’s replacement team, jfshfh178, will do in the tournament. We expect them to make the most of their opportunity to earn those very important DPC points.

Over in Group B, we expect Geek Fam and Ad Finem to advance, since both Quincy Crew and HellRaisers are still going through some roster difficulties.

Meanwhile, HellRaisers has decided to bench Ilya “ALOHADANCE” Korobkin after he refused to show up for team practice sessions.

The team that wins will also advance to the MDL Chengdu Major.

Fans will be able to catch all the action on Beyond the Summit’s Twitch stream.