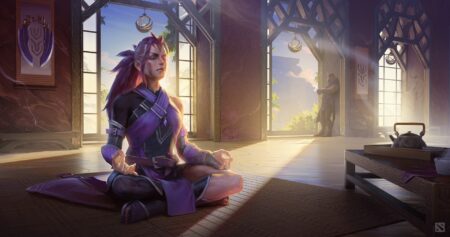 While much has been made about the never-say-die attitude of Dota players, there really are some games where it feels impossible to win.

Maybe you’re getting fountain dived relentlessly, and just want out. Perhaps you are matched with utterly toxic teammates more interested in chatting and running down mid than playing the game. But unlike many other games, Valve’s concede option comes with some serious caveats.

Is surrendering good for Dota 2?

If you are worried that your next toxic pub teammate will immediately call “gg” once loaded into the game, the concede option can only be used by full five-man parties. Plus, 30 minutes must have elapsed before typing “gg” will have any effect.

After all, all lobbies—and by extension, pro games—have had the option to surrender since the start of Dota 2. This is the first time when that option is available to public matchmaking, but the restriction still should limit its use to a small percentage out of the millions of games played every day.

This is in stark contrast to other MOBAs. In League of Legends, surrenders can be called once the 15-minute mark hits, though the vote must be unanimous. Once 20 minutes has elapsed, it only requires 70 percent of the team, that is four out of five players. In Smite, players can concede as early as 10 minutes, with special circumstance such as leavers allowing for an even earlier concession.

In Dota, the option will effectively have to be unanimous, no matter how much time has gone past. Any player can call “gg,” but any player will also have the option to cancel it immediately. Even if you are partying with mutual friends, or somebody you don’t really know well, the never-say-die attitude can still persist as long as one of five is willing to brave the heat.

It’s important to note that surrendering is not giving up, especially when it comes to full parties. It’s possible that somebody has a real-life emergency that has to take precedence. In this case, yielding can save the person’s account from a matchmaking ban and abandon, which can affect their conduct score.

In its current state, the option is nice to have. As long as it doesn’t get abused, or the restrictions around it change drastically, having the choice to concede is a good thing.