Sheever reveals her Power Rankings for the Singapore Major

Find out who Sheever has in her top ten. 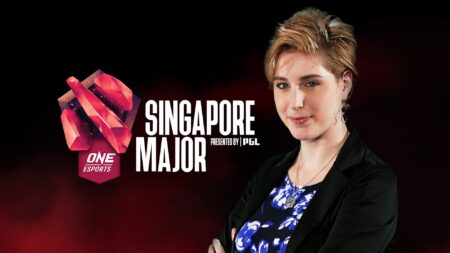 With the Singapore Major just days away, tournament host, Jorien “Sheever” van der Heijden, has shared with us her Power Rankings for the tournament.

My rankings will mostly be based on the teams’ performance during the DPC season, and there is no denying that Team Secret looked unstoppable in the European region.

This region is known to be one of the stronger ones and with their record I expect them to come out on top of this Major. I am not worried about the break in between this major and their previous LAN as we saw them win the DH Leipzig major last year after they took a six-month break.

I imagine that they are hungry to prove that they can dominate not just Europe, but the whole world.

In the Chinese region, this team has shown to be the best over the DPC season. The results of the tournaments they played in before the season did not set super high expectations for them, but they came in strong and only dropped one series in total.

The fact that these players have been in this lineup since right after TI9 and stuck together through 2020 helps them have a good foundation for their performance. They have proven that they can perform at LAN and I am expecting them to do it again at the Singapore Major.

I have put Virtus.pro third based on their performance in the DPC season. At the moment of writing this, it is unsure if Nightfall will be able to compete (they have ILTW as a backup at hand).

This team has not been tested during the DPC season, it was very clear that they were almost a tier ahead of the other teams in the region. They are a favored scrimming partner of Team Secret and I can’t wait to see them play against them and other regions on stage.

This team consists of mostly young players, and I am curious how the change in environment will impact their play. They have the chance to blow everyone out of the water, but there is also a chance that the LAN pressure will take its toll.

I believe the strongest two regions at the moment are China and Europe.

This major will make or break this theory of course, and Aster is a team that could prove it to be true. They are the only team that have been able to take a series off of Invictus Gaming.

They have looked really good during the DPC season and most of their wins were 2-0’s. Their performance speaks for itself, but my main question is if they can prove themselves against teams from other regions that they are perhaps a bit less familiar with.

Another European team in 5th place, and this was a tough call for me. I think the next few teams are so close to each other in skill that the bracket itself might be the deciding factor.

During 2020 Alliance didn’t always look amazing, but when the DPC season came they found their style and played it to perfection. The LAN environment is not unfamiliar for these veterans so I don’t expect it to make a difference in their performance.

The only team with a Singaporean in the squad surely is going to perform well here at the Singapore Major.

This is the first NA team that I have on my list and the region has proven to produce entertaining and high-level games during the DPC season. How the region will match up against the others is one of my main questions. Evil Geniuses is the best team in the region, though they did need some warm-up time (as is traditional for this squad).

Evil Geniuses always has been a team that performs better in a LAN environment, and I don’t think that will change for this Major. This is definitely a team that could easily surpass my expectations.

This is a team with a lot of potential and I believe that they have not yet reached their full strength. Will they reach it this Singapore Major, or will they need more time?

Fnatic is the last team to win an international Dota2 LAN before everything got region locked due to COVID-19, but since then the team has undergone a few changes.

I have ranked them 7th because I believe they will have a strong showing, but won’t unlock their true potential yet until later in the year, with more experience under their belt playing against the teams from other regions.

In similar fashion to Virtus Pro I think Beastcoast is another team that has not yet been tested in their own region. I think they can make a deep run into the tournament, as we know that they can perform under LAN pressure.

This is the exact squad that had an amazing performance at TI9 and with now more time and practice under their belt (and with a stable roster) I can only imagine them getting better and better.

Both the previous majors they played in they ended 7-8th and I will expect nothing less from them for this Singapore Major. I also believe they have what it takes to make a deeper run, but the competition is fierce and their lack of experience playing against international teams due to COVID-19 will in my opinion hinder them to do so this time around.

This team looked like they were going to take the top slot in the NA division, until tiebreakers decided they were to take a groupstage slot instead.

Coming from the region with the lowest diversity of heroes, Quincy Crew is actually a team that has a relatively high diversity compared to other teams. I think they are going to need that diversity to surprise some of their opponents.

This team should not have any issues performing on LAN compared to the online leagues, as every player can be considered a veteran in the field.

This is the only wildcard team that I have making it to the top 10. There are scenarios where perhaps Nigma or Liquid can take this slot, but out of the three teams Vici Gaming has proven themselves to be more stable in performance and results.

I think all wildcard teams should be worried about Vici Gaming in their group, as I feel they do not belong there. Their performance throughout the season has been stellar (all their wins 2-0, only dropping series to IG and PSG.LGD) and I have no reason to doubt that they can perform in the same way at the Singapore Major.

They have a long road ahead of them to make it deep into the tournament, but if they have the stamina it is definitely doable for a team of this caliber.

These are my predictions for the Singapore Major, mostly based on the teams performance during the DPC season.

I can’t wait to see it all play out and be surprised and amazed by the Dota2 being played.