T1 fills out its Dota 2 lineup with one of the most talented Filipino offlaners. 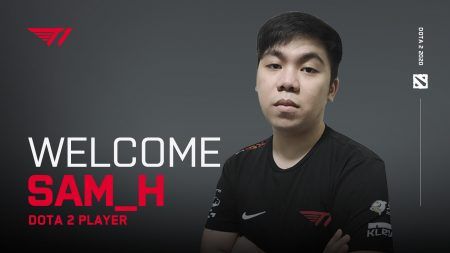 T1 has announced that Filipino offlaner Samson “Sam_H” Hidalgo has joined the organization to complete its Dota 2 team. Sam_H will fill in the spot vacated by Lee “Forev” Sang-don, who parted ways with the team late last month.

T1’s decision to release Forev came as a surprise to many. Not only was he the founding member of the organization’s Dota team, he also captained the rising squad to a promising fourth place finish at the ONE Esports Dota 2 SEA League just last month.

After his departure from T1, Forev joined Fnatic as a stand-in for Daryl “iceiceice” Koh Pei Xiang, who has taken a break from competitive play.

With Sam_H, T1 has replaced its former team captain with one of the most talented offlaners to come out of Southeast Asia in recent years. Sam_H burst onto the scene as a member of TNC’s 2016 lineup, which pulled off one of the biggest upsets in the history of the game when they eliminated then two-time Major winners OG from The International 2016.

After leaving TNC in 2018, Sam_H had a couple of stints with middling Southeast Asian teams DeToNaToR and Lowkey Esports. He most recently trialed for Neon Esports to replace Rafael Sicat “Rappy” Palo before he accepted T1’s offer.

With Sam_H off the table, Neon instead announced that they have acquired newcomer Julius “JG” Galeon to be their new offlaner.

Sam_H and T1 are currently playing at the ESL One Thailand 2020: Asian Division, where they will be facing 11 other teams from China and Southeast Asia, including Fnatic and Neon Esports, for the lion’s share of a US$135,000 prize pool.