This is your chance to play against the best Dota 2 teams in the world. 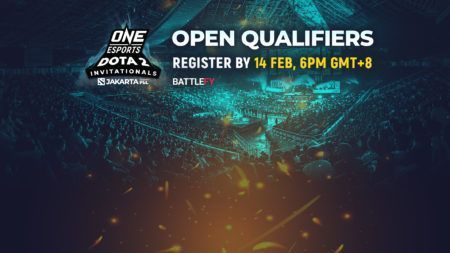 ONE Esports, in collaboration with Battlefy, has announced the official schedule for the ONE Esports Dota 2 Jakarta Invitational Open Qualifiers.

Six countries will be participating in the online qualifying round: Singapore, Malaysia, the Philippines, Thailand, Indonesia, and Vietnam.

The Regional Qualifiers will feature a pool of three teams, plus an additional invited team.

Registration starts on January 29 and closes on February 14, with the online qualifiers commencing on February 15.

Regional Qualifiers will be held on March 7-8 at the Sunway Pyramid in Kuala Lumpur, and March 14-15 at Mall Taman Anggrek in Jakarta.

Players can head to oneesports.gg/competitions to register.

Winners will automatically qualify for the ONE Esports Dota 2 Jakarta Invitational, second-place finishers will get US$1,500, while third and fourth-place finishers take home US$1,000 and US$800 respectively.

Battlefy is working closely with ONE Esports to design the Dota 2 competitive series and is powering all aspects of the online qualifiers. Battlefy will manage all online tournament operations including initial setup, seeding, matchmaking, bracket management, and player support.

The ONE Esports Dota 2 Jakarta Invitational takes place on April 18-19 at the Indonesia Convention Exhibition (ICE BSD), where the two qualified teams from Southeast Asia will get the chance to represent their respective countries and compete against the world’s best Dota 2 teams.

February 22 — Vietnam and the Philippines