Secret finish the Group Stage in second place with an 8-2 record. 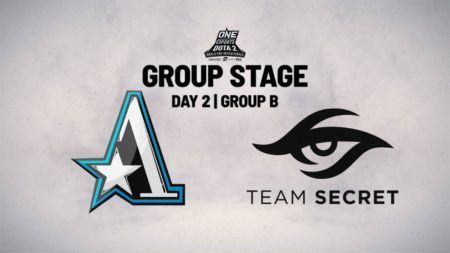 Team Aster managed to upset the red hot Team Secret in the first game of their clash on Day 2 of the ONE Esports Dota 2 Singapore World Pro Invitational Group Stage.

However, Secret managed to recover and took the second game, booking their spot to the Main Event Upper Bracket.

With two enemy heroes down and a 4,000 gold lead, Aster decided to roam right outside the Dire base, but this gave Secret the opportunity to jump and chase down the enemy team.

After winning a team fight inside the Radiant jungle, Aster immediately rushed down the middle lane and took advantage of Secret’s inability to defend, taking down their Ancient and winning the first game.

In game two, Team Secret gave Matumbaman the Broodmother, another one of his signature heroes, along with a Morphling for Nisha, and Ludwig “Zai” Wahlberg on the Centaur Warrunner.

Meanwhile, Team Aster decided to go with Naga Siren for Sccc, Viper on Kee “Chyuan” Ng, and a Puck for Lin “Xxs” Jing.

Aster managed to keep up with Secret’s Broodmother pick up until the mid-game, but once Matumbaman was able to farm his Diffusal Blade and Aghanim’s Scepter, all of the Radiant team’s heroes became easy prey for the giant spider.

Aster did manage to punish Matumbaman for diving into the Dire base, but it still cost them their Position 2 Viper.

Secret eventually caught the Dire heroes outside of their base and this was the end for Aster.

With Sccc being the only hero on the Dire side that managed to get farm, Secret easily took out the rest of Aster’s heroes.

Secret finish the Group Stage in second place with an 8-2 record, and will proceed to the Main Event Upper Bracket. Aster finish with a 3-7 record and have been eliminated from the tournament.