It’s all about pressuring your opponents. 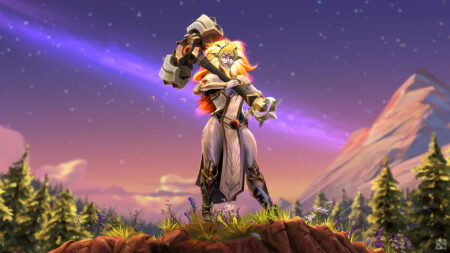 Dawnbreaker has become one of Dota 2’s most formidable heroes in both ranked and professional play. From playing the hero ourselves, he’s what we’ve learned so far.

The hero shines best when played by a skilled offlaner. She can take control of her lane and even go up against the enemy team’s carry because of her superior base stats and sustainability being a Strength hero.

For players looking to rank up using Dawnbreaker, here are some tips you can use that will get you on the right track.

In the laning phase, you’re going to want to get sustainability items like Tangos, Enchanted Mangoes, and Faerie Fires because these will allow you to put pressure on the enemy heroes.

For Dawnbreaker’s abilities, you’ll want to focus on maxing her Celestial Hammer. Celestial Hammer is great for closing the distance and dealing quick damage against enemy heroes.

Starbreaker is the most common choice next, though many will opt for a value point in Luminosity. Dawnbreaker’s two nukes will take a huge chunk of health off any hero that walks up, though do be careful not to get those skills canceled at the expense of mana.

Dawnbreaker is good against melee carry heroes, since closing the distance isn’t going to be that difficult. If you’re playing against ranged heroes in your lane, you’re going to wait for them to get out of position. You’re going to want them to use up all their abilities and consumable items early, so you can take control of the lane.

Your next item to purchase should be Phase Boots. You’re always going to be chasing after the enemy team, and this helps alleviate some armor issues as well. Plus, it scales directly with her Starbreaker ability and gives it more damage. You can then look into what your team needs from you when deciding on your next item.

Mid-game items to go for

If you are playing Dawnbreaker as a core, most will opt for either Echo Saber or Desolator.

You could also build an Echo Sabre to get the most out of your Luminosity ability. Landing more attacks will heal your nearby teammates and deal critical damage to your targets.

Desolator is a greedier choice but can pay off when you see your Starbreaker one-shot enemy heroes. It provides markedly less defense.

You’ll definitely need some sort of spell immunity in the mid-game. Both the Aghanim’s Shard upgrade and Black King Bar are viable options, depending on how much you can get away with. If you can burst important targets within Starbreaker, the Shard might be better for you. If fights are prolonged and you need to run around to chase or kite, you can’t go wrong with Black King Bar.

Getting a Blink Dagger, later on, is also a viable option to go for quick kills. You can blink to your target during a clash, immediately Starbreaker, and hopefully one-shot them before setting your sights on another target.

Should you add Dawnbreaker to your hero pool?

Dawnbreaker’s powerful laning phase can help your team snowball into an early lead. Her Celestial Hammer can be used for zoning, flash farming lane, and neutral creeps. And, the enemy team will always have to be mindful of her global ultimate, which sends her straight to her allies.

If you’re going to play Dawnbreaker, it would be better if you picked support heroes that work well with her. Good lane partners are those that can provide kill threat or lockdown from range, letting Dawnbreaker easily get a one-two combo with Celestial Hammer and Starbreaker. Crystal Maiden, Snapfire, and Rubick are fine choices.

READ MORE: The 5 best Dawnbreaker counters so you don’t get crushed by her thighs