The former Na’Vi midlaner named his organization (pronounced Bait) for his love of fishing. 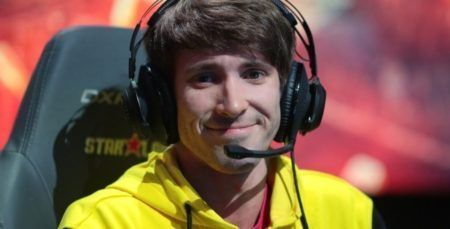 Former Natus Vincere (Na’Vi) mid laner, Danil “Dendi” Ishutin, has announced that his new organization will be called B8.

Dendi revealed the name of his organization in a heartwarming video showing an elderly Dendi reminiscing about his glory days as a member of Na’Vi — who he won The International (TI1) with and made back-to-back TI finals appearances in 2012 and 2013.

The name of Dendi’s organization, B8 (read as bait), references Dendi’s love for fishing, an aspect of his personality that was explored in Valve’s 2014 ‘Free to Play‘ documentary movie.

The organization’s logo also pays homage to Pudge’s Meat Hook, the signature ability of the hero Dendi has become most known for playing.

Dendi has been inactive since August last year, when he officially became a free agent after leaving Na’Vi’s active roster in September 2018. Before leaving Na’Vi, Dendi notably played in short stints with teams such as Tigers and the Pango.

During TI9 — a tournament he attended not as a player, but as an analyst — Dendi announced his plans to create his own organization in an interview with b2ru, adding that he was even willing to move away from being the team’s mid player in order to do so.

Dendi has yet to reveal the members of his new organization. It is expected that B8 will be competing in the third Major cycle of the 2019-2020 Dota Pro Circuit season, which will hold its qualifiers in early February.

READ MORE: Dota legend Dendi is planning to create his own org