Dendi is finally making his return to the scene at the head of his own team. 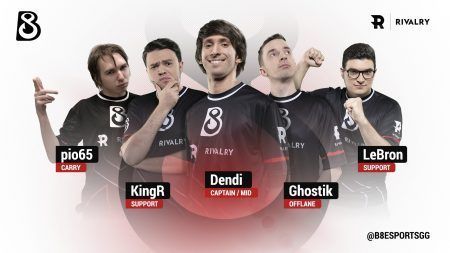 Dendi will be B8’s mid player and captain, and will be joined by his former Natus Vincere (Na’Vi) teammate Nikola “LeBron” Popović, who will be the team’s Position 5 support player.

Dendi first unveiled B8 with a heartwarming video in late January.

B8 will be competing in the CIS open qualifier for the ESL One Los Angeles Major, set for February 7-8. It will mark Dendi’s return to the competitive scene since he became inactive last August, when he officially became a free agent after leaving Na’Vi’s active roster in September 2018.

Prior to his departure from Na’Vi, Dendi notably had short stints with teams such as Tigers and the Pango, where he notably played alongside Ghostik.

Dendi has long been an icon of Dota 2, gaining popularity for his hyper-aggressive playstyle in-game and amiable personality out of it. He was a key part of Na’Vi’s dominance in the early days of the game, helping the team win the very first International in 2011 and making two-straight appearances in the grand finals of the tournament in 2012 and 2013.

Now at the helm of his own team, Dendi will be looking to add another chapter to his already storied career.