Team Blood will be bringing their amazing Dragon Knight and Vengeful Spirit costumes to Singapore. 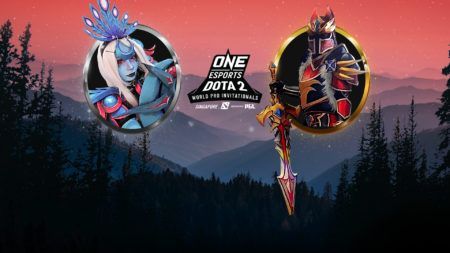 Alongside 12 of the best Dota 2 teams in the world, the ONE Esports Dota 2 Singapore World Pro Invitational will feature world-class award-winning cosplay from celebrity cosplayers, Team Blood.

Team Blood is one of the veterans of the cosplay industry, and has been cosplaying professionally since 2010. The team was formed by husband and wife duo, Darryl Izzy and Vinca Kazuki, and also features three of Kazuki’s siblings.

“We named ourselves Blood because the team is related by blood,” says Kazuki, who is also the team’s Captain.

Kazuki will be bringing her Vengeful Spirit costume to the Invitational, which won her sixth place at the KL Major Cosplay Contest.

According to Kazuki, the costume took her about a month to complete.

“The hardest parts to make were the bird legs. I use a technique called “fabric wrapping” on most of my armors, but wrapping irregular shapes is very challenging,” said Kazuki.

Izzy will be accompanying his wife and captain to the Invitational, and will be bringing his incredible Dragon Knight costume, which scored him third place at the KL Major Cosplay Contest.

Incredibly, Izzy says that the entire costume was completed in just under a week.

Taking place from December 20-22 at the Singapore Indoor Stadium, the ONE Dota 2 Singapore World Pro Invitational will feature a total of 12 teams competing for a share of the US$500,000 prize pool.