The wait is finally over. 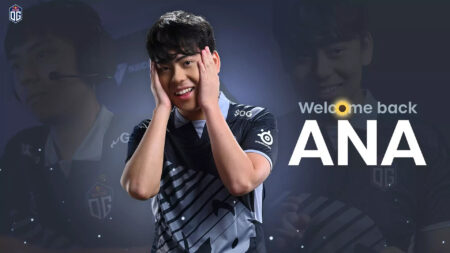 That’s right. The champ is back.

European esports organization OG announced that Anathan “ana” Pham has officially returned to its Dota 2 roster for the second season of the DPC.

Ana was a key part of OG’s success, and helped the organization become one of the highest earning esports teams by winning The International 8 and 9. OG amassed a grand total of US$26,850,000 at the time, becoming the first two-time and back-to-back TI champions in history.

“The boys feel great comfort and confidence in reuniting once more to face these challenging times and start growing back into how they want to play the game,” said OG.

After winning back-to-back TI championships, ana announced he was taking a break from competition at the start of 2020. Since then, we’ve only seen him play in community-driven events like Midas Mode and the WeSave Charity Play, where he joined TNC Predator in the Southeast Asian region.

In his absence, OG bolstered its roster with talented players like Sumail “SumaiL” Hassan and Yeik “MidOne” Nai Zheng. However, according to the organization, “Competitive synergy is something unique and incredibly complex. And despite teaming up with some of the best talent in the scene after months of trying our hardest, it felt like it never fully clicked.”

OG was one of the clear favorites to qualify for the ONE Esports Singapore Major during the first DPC season. However, the team finished fifth in the DreamLeague Season 14 DPC EU Upper Division, after losing to Team Liquid in the tiebreakers.

OG is looking to make another run for TI, and their journey starts on April 13 when they compete against the best teams of Europe in the DreamLeague Season 15 DPC EU Upper Division.

READ MORE: Yopaj was the clear breakout star of the ONE Esports Singapore Major