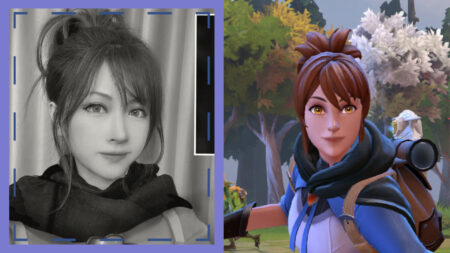 Since her debut in the DOTA Dragon’s Blood series, Marci’s popularity quickly went off the charts.

She was even deemed by fans as the best girl in the animated series despite being a secondary character next to the protagonist Princess Mirana.

Marci is the mute companion and servant of Mirana in the Dota 2 animated series DOTA Dragon’s Blood. She was later announced as a playable hero in the MOBA game and became one of the hottest picks during The International 2022.

Dota 2 caster Ams loves her so much that she even dressed up as Marci, based off her in-game model. Here is her shockingly accurate Marci cosplay.

Ams nailed down Marci’s brown hairstyle. Her makeup also made her brown eyes pop out, which is another one of Marci’s distinguishing features.

Ams mimicked two Marci expressions in her cosplay — a smiling, friendly expression and a serious, killer one, enough to take down a bunch of bad guys.

You can check more of Ams’ Marci cosplay on her Weibo account.

What is Dota Dragon’s Blood?

DOTA Dragon’s Blood is the television adaptation of Valve’s multiplayer online battle arena game, Dota 2. It follows the story of Davion the Dragon Knight and Princess Mirana and their adventures around a world of demons and dragons.

The series has three seasons so far, all animated by Studio Mir.

You can watch all seasons of Dragon’s Blood on Netflix.