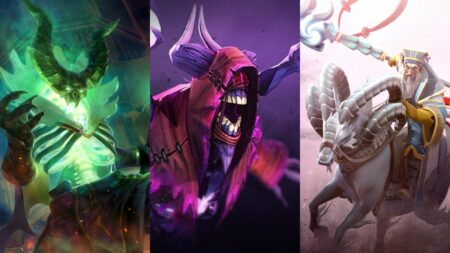 Good supports are the lifeblood of any team hoping to take down the Ancient—and chances are, you’ll need to play your fair share of them.

If you are playing ranked, you will inevitably need to play support. It’s an underappreciated and underplayed role, and players often need to grind out a few games of support to get their desired role queue tokens.

But playing support doesn’t mean you need to tank your MMR to do so. It can be a rewarding experience—especially if you are playing some of the best support heroes in Dota 2 patch 7.31.

Pugna is gaining a reputation as one of Dota 2’s best defensive supports. With Decrepify, he can render allies immune to physical damage, and 7.31’s reworked Nether Ward reduces spell damage in an area. Life Drain is one of the few spells in the game that restores both health and mana, and works for allies as well—at the cost of Pugna’s own health.

The new Nether Ward is a remarkable defensive tool. It reduces enemies’ spell damage in an area, useful against Blink initiators with massive AOE magic spells like Sand King and Earthshaker. Upgrading it with Aghanim’s Shard increases its cast range massively, from 150 to 500, and also allows it to refract Life Drain—great for canceling Blink Daggers and destroying illusions.

Decrepify is a two-pronged tool that renders a target ethereal. When used on your own ally, it prevents them from getting attacked, and can be an incredible save against a farmed carry. When used on an enemy, it slows and reduces their magic resistance, synergizing well with your Nether Blast and Life Drain. Your allies also can’t attack, so be careful not to grief your physical damage cores when you use this spell.

Nether Blast is the same old AOE nuke, but still effective. It’s one of the few spells that affect towers, so it allows him to contribute as a tower pusher even from a support position.

As a support player, Life Drain is a more impressive saving tool, but still has offensive capabilities. You can restore the health and mana of an ally from long range, ensuring your friends stay topped up and healthy even while getting beat up by your opponents. It’s still decent offensively, however, though it can be difficult to find yourself in a good position to do so.

Tranquil Boots is basically necessary for Pugna, allowing him to counteract his ultimate’s health drain.

Keeper of the Light

Even with purely defensive items, Ezalor is one of the most offensive supports in the game. He’s able to dole out surprising amounts of damage, has a powerful slow and magic resistance debuff, and can keep allies topped off with mana for constant aggression.

It’s not easy to come by 500 damage nukes, even with the drawback of having to channel for three seconds. Illuminate enables the hero to contribute in skirmishes from the backline, as well as be a premier defender against incoming pushes. Plus, 7.31’s buffs to Illuminate have made the spell even more difficult to dodge.

Solar Bind is one of the spells that makes the Keeper so frustrating. It slows targets and reduces their magic resistance, a painful endeavor against Ezalor’s low cooldown spells and his allies’ spell damage.

In Spirit Form, there’s no need to channel Illuminate, and you unlock extra spells—Recall and Will-O-Wisp–through buying Aghanim’s Shard and Scepter respectively. Illuminate also heals, which can be useful in sieging situations where enemies are trying to poke at your cores.

His combat potential is such that professional teams have even experimented with pushing KotL to the midlane, exemplified by Tundra Esports’ Leon “Nine” Kirilin’s record-breaking performance on the hero.

Atropos the Bane Elemental is a fantastic laner from either support position, and later into the game, becomes one of the best setup heroes in Dota 2. His reliability and myriad of uses make him a safe, stable pick that rarely disappoints.

Bane’s laning prowess stems from two spells, Brain Sap and Nightmare. Brain Sap ensures that you rarely lose trades, draining health from enemies while restoring your own. Since you will be playing in the side lanes, Nightmare can take one opponent out of the equation, while you and an ally can wail on the other person.

Nightmare primes targets for hard-to-land spells like Mirana’s Sacred Arrow or Lina’s Light Strike Array. There’s also no need to time your spells, such as in the cases of Shadow Demon’s Disruption or Outworld Devourer’s Astral Imprisonment, making it as foolproof as it gets.

Nightmare also serves a dual purpose as a defensive tool. When used on targets, there’s a one-second invulnerability window, which can save your allies—and yourself—from powerful spells or give them time to react with their own defensive measures.

Fiend’s Grip is perhaps the game’s best single-target stun, fully piercing spell immunity. It’s the perfect counter to a meta where every core hero picks up Black King Bar, letting your allies wail away to their hearts’ content.

Enfeeble is Atropos’ most overlooked spell. It’s not flashy, but it’s now an incredible tool against all sorts of heroes after the latest changes to it in 7.31. It reduces attack damage, health restoration, and cast range with an extremely short cooldown, adding yet another multi-tool to the hero’s Swiss Army knife capabilities.

This list is geared more towards public matchmaking. If you want to see what the pros are picking, ONE Esports’ Dota 2 hero tier list might be more your speed.