Who is Himeno in Chainsaw Man? Story, personality, first appearance

She’s got her eye on you. To get you acquainted with the big names in the series, here’s a detailed introduction to Himeno in Chainsaw Man, including details on her background story, personality, and first appearance in the manga and anime.

Warning: Spoilers if you haven’t read chapters 10-22 of the Chainsaw Man manga.

Who is Himeno in Chainsaw Man?

Himeno is a supporting character in Chainsaw Man, a horror-comedy manga series written and illustrated by Tatsuki Fujimoto. The series is set in a world where devils manifest from human fears.

Himeno first met Aki while mourning a past partner at the graveyard. Another devil hunter named Kishibe introduced Aki as her new buddy. Having already gone through five partners, she questions if he’s “useful” since all her previous co-workers died because they were useless.

While the two were initially distant, Himeno was reassured when Aki said his one goal in life was to defeat the Gun Devil. During one patrol, Himeno confronted the girlfriend of her last partner and was slapped. Aki secretly got back at the girl by putting gum on her clothes, which amused Himeno. Later on, Himeno egged Aki on to try smoking to grow their bond and he eventually agreed.

Himeno joins the action as part of Aki’s tentative squad when he rescues Denji and Power from the Leech Devil. She and Aki are considered to be senior devil hunters and take responsibility for the younger members of their team.

When Aki confronts Denji at the hospital about Power’s intentions, Himeno keeps an eye on the cuffed fiend in the hallway.

Himeno becomes part of Makima‘s six-man special squad that’s tasked to take down the Gun Devil. After she and Aki defeat a devil off the coast, Aki salvages a bullet from the corpse and uses it to track down the Gun Devil’s whereabouts.

The bullet leads them to an abandoned hotel called Hotel Morin. Himeno keeps a light-hearted attitude during the mission and occasionally teases her new recruits Kobeni and Hirokazu. She also promises Denji that she’ll give him a french kiss if he kills the devil.

As they search the hotel’s hallways, a walking head appears and attacks Kobeni. Himeno catches the devil in mid-air with her Ghost Devil while Power slices through it. She mentions that she exchanged her right eye to have full control of the devil’s invisible and intangible right arm.

Power provokes Himeno to showcase her powers again by threatening to kill Kobeni. Himeno immediately chokes Power with the ghost arm. Following the argument, Himeno says that they should all just get along.

After continuing their search, the group finds out that they’re stuck on the eighth floor of the hotel. The younger members start to panic, but Himeno does her best to help. Himeno knocks out Kobeni after she tries to drink out of the toilet, fearing that they’ll starve to death.

Aki informs Himeno that the walking head was just part of the Eternity Devil and it’s now filling the corridor. Himeno suggests that they offer it a contract for their release. Kobeni leaves her room with a knife in hand, demanding that Denji offer himself to the devil as food.

The senior duo takes down the exhausted Kobeni and tries to figure out what to do. The devil is impervious to Himeno’s ghost attacks so Aki suggests using his sword, which comes from his contract with the Curse Devil.

The sword has the potential to kill the devil, but in exchange, the move drastically shortens Aki’s lifespan. Considering her history with past partners, Himeno votes against it and tries to restrain him. Aki eventually breaks out of her grip and stands in the way of Kobeni who’s still trying to stab Denji. Himeno goes into shock seeing it all happen.

At that moment, Denji transforms and throws himself into the Eternity Devil, believing that he can take it down. Himeno observes from afar and admires Denji’s chaotic determination, and thinks he might have what it takes to defeat the Gun Devil.

Denji comes close to losing once his blades start to retract, but Himeno saves the Chainsaw Man by pulling his cord once again. The fight continues for the next three days until the Eternity Devil finally surrenders.

After the tiresome mission, the group meets once again at the newbie welcome party. Himeno fulfills her promise to Denji about the french kiss, but the drunk senior accidentally throws up in his mouth.

Denji and Himeno end up going back to her apartment, with her suggesting that they sleep together. Her plan backfires as she passes out. Denji groans about the missed opportunity, but states that he wants Makima to be his first time.

The next day, Himeno apologizes to Denji for what happened and proposes an alliance. She will help set Denji up with Makima while Denji aids her in getting Aki.

Personality and powers of Himeno in Chainsaw Man 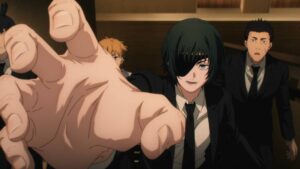 Himeno acts as an experienced, yet carefree senior who’s not afraid to tackle challenges head-on. She often jokes with her subordinates and tries to motivate them with what they want.

Despite her happy-go-lucky attitude, she does hold on to a traumatic past. Having to deal with the death of five buddies, she always keeps a close eye on current partner Aki and makes sure that he’s safe during the mission.

Himeno is contracted to the Ghost Devil and has full control of its right arm in exchange for her right eye. She is known to frequently use the devil’s abilities, regardless of the situation.

Himeno appears in chapter 10 and episode four of the manga and anime respectively.