Mirana did what now? DOTA Dragon’s Blood season 3 unravels a deeper fantasy story of our valiant heroes, but its ending may leave viewers with more questions than answers.

Mirana and her friends embark on a turbulent adventure to save the world, and there might be crucial details that you missed to fully understand what happened to the characters in season 3.

If you need a quick breakdown of the conclusion of Dota Dragon’s Blood season 3, here’s the ending explained.

How and why did Mirana start the Forge? 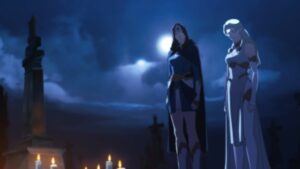 The ending of book 3 puts Mirana in the hot seat, making her decide between keeping her friends alive or returning to her original reality.

As God-Empress of the Sun, she has the innate knowledge of previous lives and a divine connection to the Pillars of Creation, also known as the eight Eldwurms. This gives her the ability to use a Forge and restore the reality where the world is safe after the explosion of the Mad Moon. Unfortunately, this is the same reality where lover Davion and bestie Marci are dead.

Mirana eventually decides to restore reality as it was because it’s the only way she can save her loved ones. She then says goodbye to her friends, especially Marci who she calls “the best parts of me in any universe”.

As they activate the Forge, Mirana briefly stops the process, fearing that she’ll be the cause of Davion’s second death. The Dragon Knight reassures her that it’s his decision and only cares about how he is remembered.

Mirana lets go of the alternate universe and returns to her original reality, now holding Davion’s lifeless body in the aftermath of Foulfell.

As she mourns the death of her lover, Fymryn — who is now Mene, goddess of the Moon — proposes that they build a new world together, to which she agrees.

What was the shopkeeper scene all about?

The shopkeeper makes another cameo in the final episode to reveal a little secret about the Empress.

During Mirana and Mene’s visit to Invoker’s Tower, Mirana finds the Archronicus, the spell book that taught Filomena about the Mad Moon.

Knowing that such knowledge could bring more chaos, she brings the Archronicus to the shopkeeper for safekeeping, who wholeheartedly accepts it as a “divine favor”. The shopkeeper also asks if she found everything that she was looking for, prompting Mirana to hold her stomach, possibly hinting that she’s pregnant with Davion’s child.

While not much was said in the scene, their offspring could be a focal point in season 4. With Davion’s deep connection with Slyrak and the Eldwurms, the child has the potential to be a future vessel and have the power of Hybrion, the hybrid transformation of all eight Eldwurms.

How did Invoker bring back Filomena? 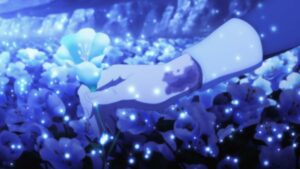 While Invoker was last seen in despair at Foulfell, it looks like the magician still has a few tricks up his sleeve.

In the final scene of DOTA Dragon’s Blood season 3, the show reveals that Filomena is alive, but still plagued with the incurable disease. Interestingly enough, she is able to heal herself with a field of flowers that surrounds her father’s tower. The young elf also utters the same phrase as her parents did at the end, “do you love me?”.

Though it might seem like a miracle to see Filomena in the original reality, her return could have been part of Invoker’s plan all along.

In episode one of book 3, Terrorblade negotiates with Invoker, promising him an “eternity of flowers” for the rest of the dragon souls. Initially rejecting his offer, the magician secretly follows through with Terrorblade’s proposition by handing all of his souls to Davion, giving the antagonist only one target in the fight.

Despite the heel turn, Invoker stays true to his second statement that Filomena would not live in a world made by Terrorblade. It just so happens that the world that the father and daughter live in right now was created by Mirana. Coincidence? I think not.

Now that Invoker has finally accomplished his goal of bringing back Filomena, the writers have the opportunity to expand his role in the story. It would be great to see a more benevolent side of the mage that isn’t so self-serving.