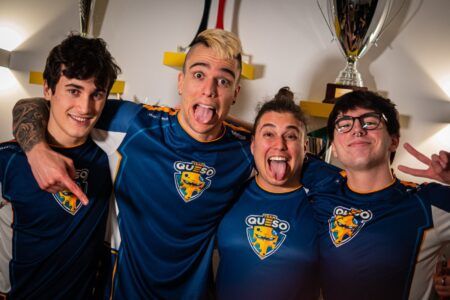 The two-day World Finals was played remotely to practice preventive measures against the COVID-19 pandemic, but the main programme took place at the Baoshan Sports Center in Shanghai, China.

Team Queso managed to even things out during Set 2 but SK Gaming won Set 3 and ultimately claimed Game 1.

SK Gaming continued to pick up their momentum with Xopxsam on the lead during the King of the Hill (KOH) set. He played flawlessly and pulled off a sweep against iAmJP, Cuchii Cuu, and Ruben, taking KOH to a 1-3 score.

After their grave loss during the first two sets, Team Queso showed everyone where they shine the most — the 1v1 sets. Ruben took down Javi14’s princess tower after an astounding Mortar-Graveyard card combo and scored Team Queso’s first win in the BO5.

Xopxsam may have dominated the King of Hill set, but he was no match for iAmJP in Game 4’s 1v1 set. iAmJP’s winning moment? His Royal Giant card managed to scathe Xopxsam’s princess tower using two massive cannon blows!

This victory brought Team Queso and SK Gaming to a matchpoint, featuring one final game between Morten and Ruben.

In the last set, Ruben extended the game to a full two-minute overtime and dealt the most damage to Morten’s left princess tower using his Fireball and Graveyard cards. He won the overtime round with about 730 tower HP left to spare.

Ruben was hailed as the Finals MVP for his flawless performance which became an integral part of Team Queso’s overall victory.

Team Queso bested seven other teams on the international stage to claim the Championship trophy along with the lion’s share of the US$380,000 prize pool.

Unlike most of the esports tournaments this year, the Clash Royale League World Finals found a way to push through with its tournament proper despite issues raised by the COVID-19 pandemic.

“We’re humbled and amazed by the level of fan enthusiasm we’ve continued to see from all the different corners of the world,” said Clash Royale League Commissioner Chris Cho. “We would not have been able to do this without the invaluable support of our passionate and loyal community, as well as these incredibly dedicated players and teams.”