And what does Howl’s Moving Castle have to do with it? 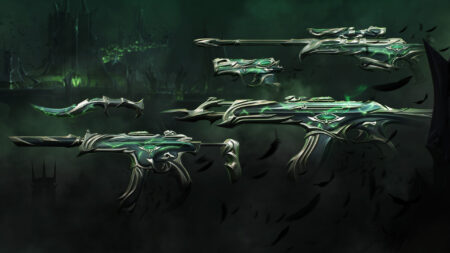 A new Valorant skin bundle is on its way, and it has some interesting inspiration behind it. The Forsaken skinline has an evil and twisted, but mystical look and includes a Classic, Spectre, Operator, Vandal, a Forsaken Ritual Blade, and a card, spray, and gun buddy as accessories.

If it reminds you of evil witches, banished monsters, or maybe even orcs and Nazgul, Art Lead for Valorant Sean Marino would say you’re right.

“We imagined a world where a bird-like race ruled a kingdom in the clouds, with the royal family’s guard using the Sovereign guns (instead of swords) to protect them,” says Marino. “We asked ourselves what would happen if one of those guards broke his oath, became corrupted, and was then banished.” 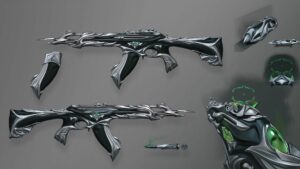 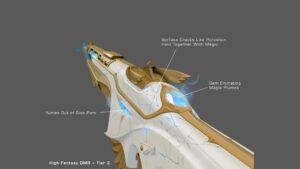 Senior Producer Preeti Khanolkar says the Forsaken guns are the mirror image of the Sovereign, from design to inspiration, and even audio cues.

“It still retains many similarities to the Sovereign, like the swirling gem effects, the magical lines (which are now cracked). For audio, the Forsaken use the same instruments but in a Minor key to convey a sorrowful version of Sovereign.”

He adds that the developers and artists borrowed heavily from movie references to convey something corrupt but beautiful, like Howl’s Moving Castle and Natalie Portman’s transformation in Black Swan.

The different levels also contribute to the level of corruption of the guns:

The Forsaken bundle will be available in the store for 7100 Valorant Points starting April 27.