Is NUTURN Gaming truly the biggest threat to NA Valorant?

The Korean team faces Sentinels next. 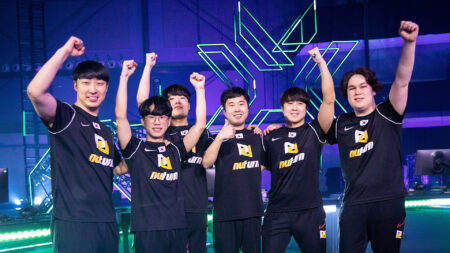 While audiences were fixated on the highly anticipated battle between North America and Europe, NUTURN Gaming surprised the Valorant scene by making it all the way to the Upper Bracket Finals of Valorant Champions Tour (VCT) Stage 2 Masters Reykjavík, Iceland.

NUTURN Gaming proved they were the best team in Korea, handing Vision Strikers their first tournament loss ever in the VCT Korea Stage 2 Challengers.

In the same vein, on Day 4 of Masters Reykjavík, they presented North America its first inter-regional loss after defeating Version1 in a thrilling Upper Bracket Seminals match.

After being completely outplayed by Version1 on Haven 13-3, NUTURN did not get discouraged going into the next map on Ascent. The Korean team gained their confidence back by keeping the score close at halftime, 5-7.

Both teams traded rounds after the half, but it was NUTURN’s Sova main, Kim “Lakia” Jong-min who came up big during crunch time.

He shocked Version1 by running through a Killjoy Nanoswarm, catching the last two players off guard, which earned NUTURN their 12th round win.

Lakia then anchored B-site for his team during overtime. After taking down two Version1 players entering from B-main, Lakia retreated deep into the site, which forced the North American team to clear all of the site’s corners.

This gave NUTURN Gaming the advantage in the trades, which forced the match into game three.

Both teams put on a show on Split, with every round decided by minor mistakes. This time, it was Park “allow” Sang-wook on the Jett who provided NUTURN Gaming critical impact frags in pivotal moments of the game.

Version1 was forced to react to what NUTURN was doing throughout the game, and this always put them at a disadvantage when both teams clashed.

After their huge win, Lakia and Seo “Suggest” Jae-young even had a little post-game celebration gesture where he mimicked cutting off Version1 Anthony “vanity” Malaspina’s cat ears.

Can they defeat North American favorites Sentinels next?

NUTURN Gaming is now set to face the best team from North America, and arguably the strongest team in the tournament when they go up against Sentinels in the Upper Bracket Finals.

In post-game interviews, Sentinels’ Michael “dapr” Gulino and Tyson “TenZ” Ngo shared that they want to go head-to-head against NUTURN Gaming, hoping to play against a new team and a new region.

For NUTURN’s Suggest, their motivation is a bit simpler. “This might be a little bit disrespectful, but we came here to go up against Sentinels,” he shared in a post-game interview. “We expected this matchup.”

The Korean team is going to have to try something new on Haven if they hope to upset Sentinels and advance to the Grand Final. In both of their matches in the tournament, NUTURN has had slow starts. They now have a reputation of bad performances on Haven after a 5-13 loss to Sharks Esports, and a 3-13 defeat at the hands of Version1.

While NUTURN has made it a habit of banning Icebox throughout Masters Reykjavík, they may have to ban Haven in their upcoming match against Sentinels instead.

Meanwhile, the top seed North American team has remained undefeated on the map. They defeated Fnatic 13-10, and dominated Team Vikings 13-6 on Haven.

Watch the match live on Valorant’s Twitch and YouTube channels.

READ MORE: ShahZaM reveals how Sentinels enjoy getting into their opponents’ heads