The Spanish CS:GO star is ready to start his Valorant competitive career. 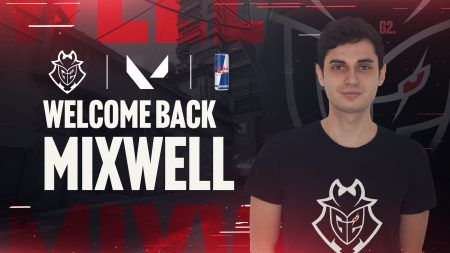 European esports juggernaut organization, G2 Esports has announced that it is entering the Valorant esports scene by signing former CS:GO pro Oscar “Mixwell” Cañellas Colocho as its first member and captain of its Valorant roster.

For Valorant fans who are unaware of Mixwell’s CS:GO history, he is a long-time veteran who started his professional career in 2012. He then joined multiple Spanish esports organizations, until he landed his big break with OpTic Gaming from 2016 to 2018. He also had a short stint on G2’s CS:GO roster as a trial member. Mixwell eventually finished his CS:GO career with Cloud9, after he was placed as an inactive member of their roster.

Mixwell has once again jump-started his esports career by making the switch to Valorant. During Valorant’s closed beta, Mixwell was one of the first players to reach the Valorant rank, and has played alongside former CS:GO pro, Adil “ScreaM” Benrlitom. They played under team Prodigy and won the Fnatic Proving Grounds: Valorant Open tournament which included a total of 32 teams.

“The goal is to be the best Valorant team in the world and I want to be the best player in the game, have fun representing the fans around the world, and I am sure we can do it together,” said Mixwell.

Together with G2’s roster announcement, it has also revealed an official partnership with Red Bull as the G2 Valorant pro team’s first major sponsor.

G2 Esports CEO, Carlos “ocelote” Rodriguez was excited to announce the organization’s decision to compete in Valorant, stating that “G2 will have a World Championship winning team and it all starts with Mixwell. Many top organizations fought hard for him and we are delighted he’s put so much trust into letting us build a killer lineup alongside him.”

Prior to G2’s Valorant roster announcement, the organization had already expressed interest in Riot’s latest competitive FPS with the G2 European Brawl, accompanied by the recently announced G2 Esports Valorant Invitational, which will be the first event to jumpstart Valorant’s Ignition Series on June 19.

G2 Esports is one of the most prestigious esports organization today. They boast a stellar League of Legends squad that has been dominating the LEC. And, their CS:GO squad also features one of the most famous Counter-Strike players in Kenny “kennyS” Schrub. With the organization setting its sights on dominating Valorant, it would be interesting to see which players G2 decide to sign to complete its Valorant roster.