The fans were the real winners. 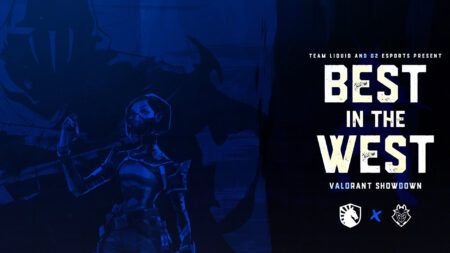 The Best In The West Showdown was orchestrated as a unique best-of-three match between two of the most popular teams in the European Valorant scene.

After trash-talking each other on their official social media pages, Team Liquid and G2 Esports were set on a collision course that entertained FPS fans.

The first match of the series saw both teams play an all Jett five-versus-five match on Haven. And Team Liquid looked to be the better aimers at the start, after taking a 7-1 lead on the attacker side.

But by the ninth round of the game, it looked like G2 was finally going to get back on track by getting a two for four trade at C-long right after the round started. However, they were up against the headshot machine, Adil “ScreaM” Benrlitom who won an incredible 1v3 by fighting his way out of a narrow corridor.

Towards the end of the match, both teams decided to “shake things up” by hosting an online poll in which fans voted that all players max out their in-game sensitivity, which resulted in hilarious aim battles.

Game 1 concluded with Team Liquid hitting more of their Judge shots, and Dom “soulcas” Sulcas getting the knife kill on Ardis “ardiis” Svarenieks.

Team Liquid would continue to win the next two maps on Split and Ascent, while fans consistently voted for even more ridiculous match scenarios, such as giving the players agent invincibility and infinite respawn.

Fans who would like to watch the entire event can visit the official Aim Lab Twitch Channel.