Mendo tallied a total of 61 kills and had the least deaths out of all the players in the Grand Final. 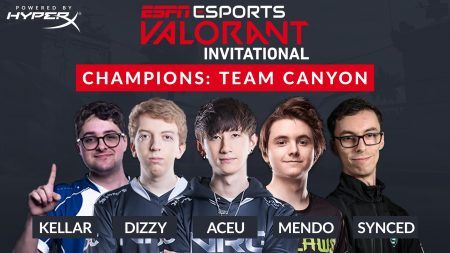 The two teams met in the Grand Final after Team Canyon defeated Overwatch’s Team Heroes, and Team Mirage defeated the Valorant dev team. Both matches finished with a 13-11 score.

In the first map on Bind, Team Mirage took a commanding 9-0 start with a superb performance from Spencer “Hiko” Martin. He was also able to clutch out the final round that gave Team Mirage a 1-0 lead in the Grand Final.

The following game on Haven was more even with Lucas “Mendo” Hakansson scoring four kills to clutch the final round, forcing a final game.

Both teams continued to trade rounds up until Coby “dizzy” Meadows gave Team Canyon the two-round advantage with a crucial clutch on the 20th round.

Mendo closed the show with some amazing sniper kills on his Operator that won Team Canyon the last two rounds of the third and final game.

With their 2-1 victory over Team Mirage’s group of ex-CS:GO pros, Team Canyon proved that Valorant will not be dominated by players with Counter-Strike backgrounds.