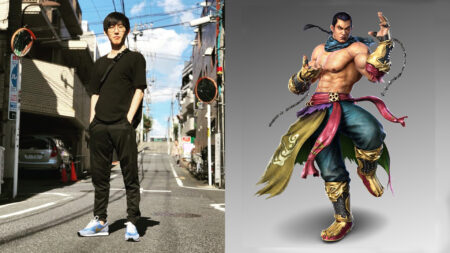 While he’s known more for his Dragunov and Heihachi, Kim “JDCR” Hyun-jin has recently picked up Feng Wei as his new go-to character while he’s streaming.

He became interested in learning the character after fellow Korean player Choi “SunChip” Seon-whi started grinding the Kenpo master in online matchmaking. The Feng newbie even fought the Feng master in a quick impromptu match.

During the intense set, Sunchip was using Devil Jin, which he told JDCR was a tough match-up for Feng. With a few electrics and lasers, Sunchip easily got the 2-0 on the EVO 2017 champ but decided to concede a round in good manner.

Already aware of DJ’s weakness to sidesteps, JDCR evened the score out and took the third game with an incredible Soaring Eagle hop kick that delivered two Climbing Dragons. Though his combos were not on the pro level yet, he managed to get away with spamming Feng’s QCF headbutt and won the game with a simple uppercut.

Just a week into being a Feng fanboy, JDCR proved his skills on the Kenpo master by bringing him all the way up to Tekken God Prime.

JDCR easily displayed his mastery of the character, pulling out advanced moves like sidestep sweeps to Lingering Shadow and back turn cancels. He even caught one Leroy Smith player in Feng’s trademark Kenpo step launch.

“I feel like Feng Wei is a good character to build your fundamentals and Tekken basics,” said JDCR.

While this might just be a one-time thing for JDCR, it could be interesting to see the Tekken pro use it in a competitive setting. He’s strictly been maining Dragunov on the pro circuit, but Feng could be a solid surprise-pick pocket character as he isn’t really seen at the highest levels of competitive Tekken. More importantly, Feng has a solid evasion strategy against Geese Howard.

READ MORE: Knee trained in Pakistan just so he could beat the region’s own Tekken god later that year