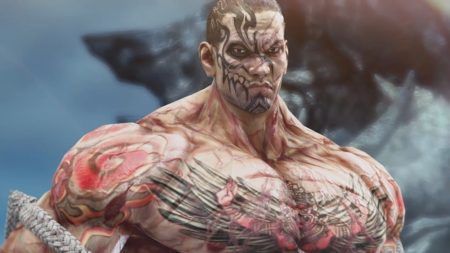 Before they announced the new characters, the pair started by showing off more footage of Leroy Smith, who was announced at Evo 2019.

As a Wing-Chun master, Leroy Smith is a parry-heavy character and, similar to Feng, he seems to have a move that parries through a combo.

After the Leroy trailer, lovable sumo wrestler, Ganryu was revealed as the next character to join the game.

Ganryu is an O.G. Tekken character who appeared in the very first entry in the series. For Tekken 7, he’s traded in his traditional sumo garb for a more ostentatious look.

Judging from his gameplay trailer, he’s retained his trademark sumo slaps and body slams, but he also seems to have a new Rage Drive with a short hellsweep and a deadly stomp.

For the final character of Season 3, and with the TWT finals taking place in Thailand, Bandai Namco chose to immortalize the Thai people with their own terrifying fighter, Fahkumram.

Towering over characters like Marduk, Fahkumram is a Muay Thai monster with full-body tattoos and scars on his face. From his gameplay, he looks to be a counter-hit heavy character, relying on Muay Thai techniques such as head-kicks and elbow and knee strikes.

He also seems to have a power-up ability that adds a cinematic attack to his combo, similar to Noctis’ Flare Drive.

If you already have the Season Pass 3, Leroy Smith and Ganryu will appear in-game by December 10 along with the new frame-data display feature.

Fahkumram and the new Thailand-inspired stage will arrive in Spring 2020.