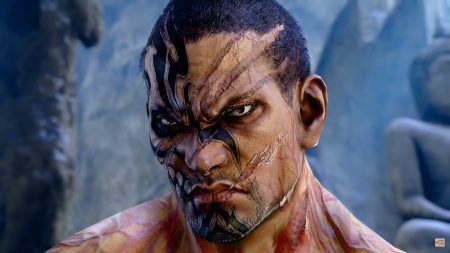 While the Tekken World Tour has taken a few detours due to COVID-19, Tekken fans can now look forward to playing Tekken’s newest character, Fahkumram, when he releases next week on March 24.

His launch trailer gave some significant insights into the Muay Thai monster’s move-list.

Aside from traditional knee strikes and push kicks, Fahkumram also looks to have an impressive counter-hit game. Despite only having a simple hop-knee, he has an array of crazy counter-hit combo starters, ranging from a guaranteed punch-kick punish and a one-hand cartwheel.

As for his Rage game, he is equipped with two Rage Drives and one Rage Art. The Rage Art seems to have a meter or skill-based attribute to it, but the video did not show it in detail.

As for the Rage Drives, these may be Fahkumram’s bread-and-butter set-ups. With one being an aerial knee-strike to dive-kick ender and the other being an in-combo sweep into a screw, it leaves fans with no real option other than to defend a Rage-filled Fahkumram.

However, Fahkumram does seem to have a few weaknesses. From the video, he has limited wall-carry and doesn’t really have a solid mix-up strategy. Other than his Rage Drive hellsweep, you can possibly sidestep most of his striking combos. The video even shows that his straight kicks can be sidestepped to the right.

Along with Fahkumram, players can expect a new Thailand-themed stage that features a multi-level temple. The stage has one wall-break and one floor-break, giving Tekken’s best fighters some extra damage in their deadly combos.

You can check out the release date trailer down below: