Knee has not had a good year against Pakistani pros. 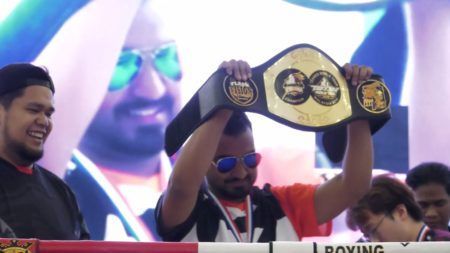 Just like Arslan did at Evo, Awais defeated none other than Bae “Knee” Jaemin, the current number one ranked player on the Tekken World Tour, in the grand finals.

Awais had a tough road ahead of him in the grand final as he was fighting from the losers bracket and needed two sets to defeat Knee.

In the first set, Awais stuck with his trusty Akuma while Knee opted for a surprise Marduk pick, a character outside of his usual rotation.

Game one was an equal display of skill from both sides. But with the score tied 2-2, Knee made an uncharacteristic mistake, dropping a critical juggle at the end of the round. Knee tried to regain advantage by launching Awais again but ended up on the wrong end of Akuma’s meter-burn combo.

In the second game, Awais took over, pressuring Knee throughout with relentless aggression. He even managed to score a perfect round to finish the game, burning his meter right at the beginning to lure Knee into a deadly combo.

Knee did better in the third game, and again the score ended up tied at 2-2. But Awais once again pressured Knee into the corner, and finished him off with a heavy combo to punish Knee’s wake-up low kick, taking the first set comfortably 3-0, and resetting the bracket.

For the second set, Knee switched to Kazuya, and immediately saw better results.

The Tekken God was able to create better mix-ups that slowed down the game and kept Awais from pressuring him. Knee easily took game one with a quick hellsweep and a flying kick.

However, Awais started reading Knee’s mixups better and counterattacked with huge combos whenever he saw an opening. He took the next two games easily, including a 3-0 in game three.

Instead of throwing out mixups, Knee started waiting for Awais to attack first, then counterattack. It worked well and Knee managed to close out the game with a well-timed block on Awais’s Ashibarai and a mid-air punch to stop Awais’s combo.

With the score tied 2-2, the entire tournament would come down to a final game.

However, Awais raised his game again and completely took over, dominating Knee with his hyperaggressive style, taking the game 3-0 and even ending it with another perfect round.

With his first championship win, Awais goes home with US$500 and 150 Tekken points, putting him at number 61 on the Tekken leaderboard.

Coming in second, Knee takes US$250 and 100 points, and still sits comfortably in first place on the leaderboard.

The next Tekken World Tour event will be the Summer Jam in Essington, Pennsylvania, which will happen from August 30 to September 1.