Can anyone stop Knee? 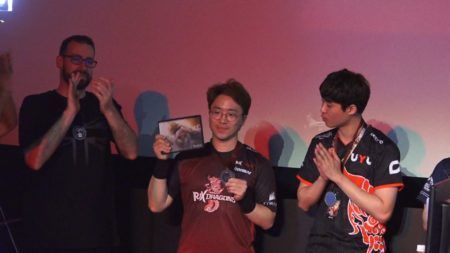 How Knee won the Tekken championship at VSFighting 2019

The first game was an equal display of skill from both sides with LowHigh on Kazumi, and Knee on his signature Steve. Knee was able to close out the game with a counter combo thanks to an untimely Rage Drive by LowHigh.

Game two was a lost cause for LowHigh. In his attempt to chip off Knee’s health through low hits, he was left vulnerable to Steve’s counter-hits. In the third round, the ROX Dragons member sidestepped Kazumi’s Rage Drive and finished the round with a quick punch combo, giving Knee an easy 3-0 victory.

With Knee just one game away from the championship, LowHigh went back to the Character Select screen and swapped to his other main, Shaheen, for the next game.

LowHigh finally found his footing with Shaheen in Game three. The UYU player kept Knee at bay with an aggressive first round and, with a fresh move-set in play, LowHigh utilized Shaheen’s slide to deal some decent damage against Knee.

Although Knee landed a dangerous Rage Drive in the third round, LowHigh played some next-level defense, ending the round on a sweet counter-hit.

With momentum on his side, LowHigh dominated Knee in Game four. Knee switched to a more aggressive playstyle, but it was useless against LowHigh’s lightning-fast reads. The first round ended with a fantastic Rage Art finish by LowHigh while the third round showcased the UYU player’s risky interruption of Knee’s Rage Drive.

Unfortunately, LowHigh couldn’t maintain his momentum, and by game five Knee had LowHigh’s Shaheen fully worked out. Knee sped through the first round and even ducked under LowHigh’s Rage Drive to claim the second round with a punish.

With game five tied at 2-2, the last round would either reset the bracket for LowHigh, or win the tournament for Knee. Both players played cautiously, desperately chipping with numerous low-poke exchanges. With both players low on life, the two blindly went in for a quick jab. After the intense slow-motion clash, LowHigh fell to the ground while Knee survived with a pixel of health left, taking a 3-2 victory and the tournament title.

For his win, Knee brings home US$2,500 and 300 Tekken points, keeping him firmly in first place on the Tekken global rankings. He’s now maxed out his possible points (900) from Masters tournaments. As for LowHigh, he won US$1,250 and 220 points, placing him second in the rankings.

The next Tekken World Tour event will be the highly-anticipated EVO 2019 in Las Vegas, which will happen on August 2-4.