Jimmy finally gets the gold. 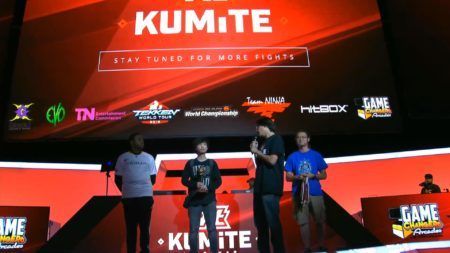 Jimmy is widely considered the world’s best Bryan player but has been unable to take home the gold until now.

In the grand finals, he faced fellow American, Marquis “Shadow20z” Jordan who started off the match playing Claudio.

Jimmy drew first blood by winning a hit-clash against Shadow, surviving with a tiny health lead due to some crucial low pokes earlier in the round.

Jimmy took game one after landing a beautiful 50% combo. Shadow tried to retaliate with a running Starburst move, but Jimmy punished him with a sidestep jab combo to close out the game.

Jimmy kept up the momentum in game two with excellent defense, landing numerous counter-hits whenever Shadow tried to mount any offense.

In the last round, Jimmy made an impressive comeback with a wall splat combo, ending with Bryan’s marching-band kicks.

Down 2-0, Shadow immediately switched to his other main, Kazuya, for game three. The switch paid off immediately, and Shadow used his faster punish abilities and hellsweep well, taking the first round with a time-up win.

With Jimmy still figuring out Kazuya’s moves, Shadow had opportunities to catch him with some devastating counter-hit combos.

For game four, Shadow kept up the momentum and played exceptional defense. With a well-timed block, he punished Jimmy with Kazuya’s lightning-fast punch combo to take the first round.

Jimmy finally started to find his footing against Shadow’s Kazuya in the next round, and started opening him up with Bryan’s taunt jet uppercut, earning himself a perfect in the next round.

In round three, Jimmy looked like he had Shadow fully worked out, landing two massive combos and a wall splat to end the round.

Shadow managed to take round four to tie the score up at 2-2, but Jimmy refused to let his opponent get back into the game.

Round five was a complete blow-out, with Jimmy hitting an interrupting wall splat combo to bring Shadow low, then landing a Northern Cross kick that caught Shadow mid-air to end the game, taking the set 3-1, and with it, his first tournament win of the year.

With his championship win, Jimmy took home US$500 and 150 Tekken World Tour points, putting him in 15th place on the TWT leaderboard.

The next TWT event will be Clash of the Olympians in Athens, which will happen on September 21-22.