Can anyone stop Team Korea? 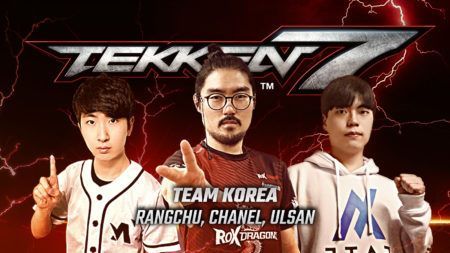 This is part of “Battle for Tokyo“, a series on the teams competing at the ONE Tekken Tokyo Invitational.

On October 5, nine of the world’s best Tekken pros will meet in Tokyo to compete in the first-ever ONE Tekken Tokyo Invitational.

Korea is home to many of Tekken’s best players so it should be no surprise that Team Korea is absolutely stacked, and is definitely one of the favorites to win the tournament.

Rangchu is a ferocious Panda player, and is the reigning Tekken World Tour Finals champion, defeating Tekken legend, Son “Qudans” Byeong-mun, in the grand finals last year. His dedication to Panda has made him a fan-favorite, as most experts consider Panda to be fairly low-tier.

In this year’s TWT, Rangchu sits at ninth place on the leaderboard. While he has no Master or Challenger event wins yet, he’s been consistently placing in the top 10 at major tournaments.

He placed fourth at both CEO Daytona and Thaiger Uppercut and took third place at Combo Breaker. As for minor tournaments, Rangchu has been dominating Japan’s dojo circuit, racking up 240 points alone just from Dojo wins.

At just 20-years-old, Ulsan is one of the rising stars of the Korean Tekken scene. But despite his young age, he already has some major victories under his belt including a huge win over 2017 Evo champ, Kim “JDCR” Hyunjin, in the grand final of Battle Arena Melbourne 11, which won him his first-ever Tekken Master event.

Ulsan also placed fifth at the FV Cup and third at Thaiger Uppercut and is currently ranked 11th on the TWT global leaderboard.

Chanel is a seasoned veteran on the Tekken World Tour, and is one of the most versatile players out there, capable of playing Alisa, Eliza, and Julia all at an extremely high level.

Chanel is currently ranked 17th on the global leaderboard, with his best performance this year being a second-place finish at CEO Daytona where he unfortunately had to face friend and teammate Bae “Knee” Jaemin in the grand final.

Chanel also placed fifth at Combo Breaker and ninth at the FV Cup.