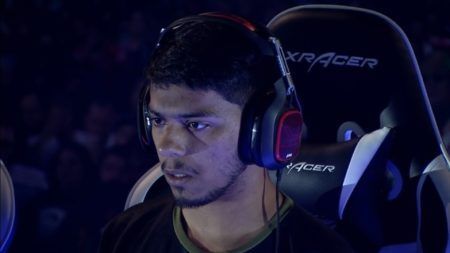 The legend of Pakistani Tekken prodigy Arslan “Arslan Ash” Siddique reached new heights today as he won his first-ever Evo title, going undefeated throughout the tournament, and taking down the Tekken God himself, Bae “Knee” Jaemin, in the grand finals.

Arslan had already defeated Knee earlier in the day, sending him to the losers bracket, but Knee was able to fight his way back to the grand finals for a rematch.

With Geese Howard being ineffective against Arslan’s Kazumi in their first matchup, Knee instead chose Kazuya as a counter pick to the Pakistani player.

Game one was an equal display of skill between the two players with Arslan playing a more aggressive attitude, working his sidestep to bait out whiffs, and Knee taking a more measured, careful approach.

Although Arslan won the first round, Knee immediately responded by winning the second round with a devilish Rage Drive.

With the first game tied 2-2, Arslan was able to punish one of Knee’s whiffs with a launch and executed a vicious wall combo, winning the first game with a Rage Drive.

The second game started with a much closer round, with Knee almost ended things with a big Rage Drive, but it wasn’t enough to put Arslan away, and he poked away at the last bit of Knee’s health with a well-timed karate chop.

Knee changed his tactics in the next round and started to push more offensively, trading pokes with Arslan and going for big hit-confirm combos when he was able.

The change of pace worked, and Knee racked up two quick rounds. In the last round, Knee executed two Electric Wind God Fists (EWGFs), his transforming Rage Drive, and a quick wall combo to secure the game and tie up the score.

With the game tied 1-1, and a new infinite stage, both players slowed the pace for game three.

With no wall combos available, both players focused on poking and sidestepping. With time ticking down, Knee went for a big hellsweep to combo into, but Arslan read him like a book, sidestepping cleanly out of the way and punishing to claim the round.

With Kazumi’s more diverse set of normal attacks, Arslan easily avoided Knee’s attacks and chipped methodically away at the Korean pro’s health. Knee had no answer and he ended up losing the third game 3-0.

Facing elimination, Knee decided to switch to another Mishima-style character, Devil Jin, to try to reach the reset.

However, even against a new character, Arslan needed no time to adjust, and dominated Game four, taking the first two rounds with ease.

Facing tournament point, things were looking bleak for Knee, but he refused to go down easily.

Knee went back to his safer, counterattacking strategy, and only went for big combos when he could hit confirm into them. Knee finally got on the board in game four by canceling Arslan’s Rage Drive and ending the round with a quick punish.

Playing more confidently, Knee took the next two rounds as well, utilizing his tsunami kicks as a quick and damaging punish to chip away at Arslan’s health, and tying the score at 2-2.

With one game left in the first set, Knee was looking for the reset, while Arslan needed just three rounds to win it all.

Both players came out aggressively and traded pokes early in round one. However, Arslan noticed that Knee was not guarding low, and a low kick and a quick chop to the knees secured him the first round.

Knee tried to stay aggressive in round two, but Arslan easily blocked or evaded his attacks, leading to big counterattack damage that let Arslan take the second round.

In round three, Arslan again went for low pokes and Knee kept failing to block.

With a big life lead, Arslan risked a counter-hit trade that brought Knee close to death.

With no other option, Knee rushed in with a go-ahead EWGF, but Arslan deftly sidestepped it and punished him in return with a quick jab combo to end the game, taking the set 3-2, and winning his first-ever Evo title.

Evo 2019 is only Arslan Ash’s second appearance on the Tekken World Tour, but with two appearances, two victories, and not a single loss under his belt, he looks like the best player in the world right now.

The next TWT event will be Collision 2019 in Peru, which will happen on August 17.