All the top SSBU highlights from Evo Japan

The top 8 at Evo Japan featured an eclectic mix of playstyles and characters. 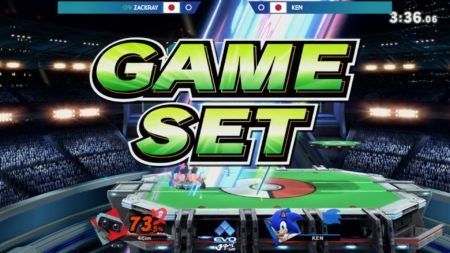 The always-popular Super Smash Bros. Ultimate saw around 3,000 participants at Evo Japan, even with the top prize being just a Golden Smash Pro controller.

Here are our favorite SSBU plays from the tournament:

Currently ranked at #1 in the Japan Smash Rankings, Sota “Zackray” Okada proved he deserves his rank in his match against Kengo “Ken” Suzuki.

With his expert knowledge of Rob, he caught Ken with a Gyro projectile, immediately turned around to change Ken’s knock direction, and ended the set with a simple up-smash.

With both of them on their final stock, Raito and his Duck Hunt quickly tracked Shky on his way down, executing the ZSS player with a perfect back-air.

Although ranked fairly low in the Japan Power Rankings, Yutaro “Paseriman” Nagumo showed that everything is possible in a Smash game.

With his simple double-jump method, Paseriman dodged Zackray’s attacks and landed on the platform to deal the most satisfying up-smash to defeat Japan’s #1 SSBU player.

Although Kome eventually won this match, Raito had some success with DLC character Banjo-Kazooie.

Raito did his best to edge-guard the Shulk player as he was in Menato mode. With the Menato mode depleting quickly, Raito predicted Kome’s neutral get-up from the edge and took him out with an amazing down-smash.

Tea is a master at Pac-Man’s item management. With every item in use, Tea had some incredible moments when throwing his full arsenal.

In the Winners Finals, Tea managed to win the round with a miraculous hail mary apple throw that hit Shuton’s Olimar on the back of the head.

Knowing that Paseriman is a flashy player, Kome kept the Fox player in the air for a ground advantage.

Slashing away at the airborne Fox, Kome finally caught Paseriman in an air-slash as he tried to use his illusion skill to grab the edge.

In the Losers Finals, with Kome up by one stock, all he had to do was wait for Tea in the middle of the platform.

Tea was hesitant on stepping back on the stage and tried to go for an aerial combo on the Shulk player. However, Kome already had Smash mode activated and caught up to the floating Pac-Man for a final back-air to win the game.