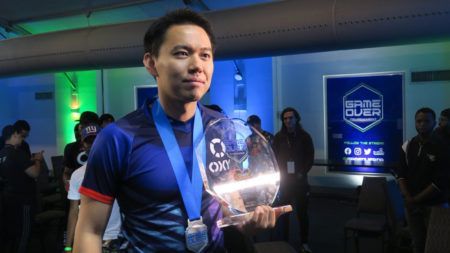 Legendary Japanese pro, Hajime “Tokido” Taniguchi celebrated his 33rd birthday in style with a dominant performance at Game Over in the Dominican Republic this weekend.

In the winners quarterfinals, he took out local hero and crowd favorite, Caba, then made quick work of fellow Japanese pros, Keita “Fuudo” Ai in the semifinals, and Ryo “Dogura” Nozaki in the winners finals to reach a grand finals matchup against Arman “Phenom” Hanjani.

Right out of the gate, Phenom’s Karin blitzed Tokido with his fast-paced offense, taking a perfect round early on.

Phenom kept the pressure up and took the first set 3-1, resetting the bracket.

In the second set, Tokido focused more on his fireball game, and used it to trap Phenom in the corner, easily taking the first game.

The second game was more of the same, with Tokido using a Shakunetsu Hadoken to trap Phenom in the corner, and then dashing in and hit confirming into a stylish Critical Art finish.

In game three, with his back against the wall, Phenom knew he had to turn things around, but an incredible comeback by Tokido put a stop to that.

At tournament point, Tokido found himself trapped in the corner, but a beautiful cross up into a Critical Art finish ended the set 3-0 and with it the tournament.

For his first-place finish, Tokido earned 700 CPT points and US$7,000, which keeps him at second on the global leader board with 2,145 points.