It came down to one final round for the title. 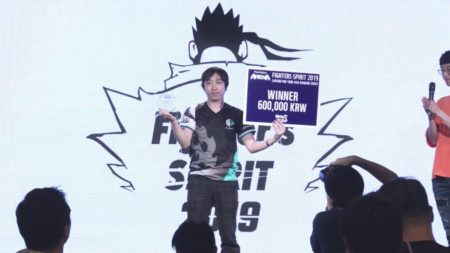 The grand finals match was a rematch of the winners final, where Fujimura narrowly beat Hajime “Tokido” Taniguchi 3-2.

The highlight of the grand finals was this insane play by Fujimura, who used an EX Kazekiri into an exploding Kunai to keep Tokido airborne. He then used his Fuma Shuriken followed by all his remaining Kunais to win the round.

While Fujimura showcased his insane combo skills throughout the weekend, Tokido proved why he’s considered one of the five Japanese gods of fighting games with plenty of his own combos.

The first came from Fujimura, with the score tied 1-1, and less than 10% life left. He gambled with two risky corner throws, but followed them up with an excellent read and punish on Tokido’s EX fireball, comboed into a Critical Art finish.

Tokido fought back and took the next two games, winning the first set 3-1 with this sick 15-hit combo, resetting the bracket.

In the second set, both players started more cautiously, playing the footsie game at a safe distance until Fujimura was able to hit this beautiful hit confirm kunai into a Critical Art.

Fujimura has proven again and again that he is one of the best Street Fighter V players in the world with corner advantage, and even Tokido had no answer to Fujimura’s corner pressure.

With Fujimura up 2-0, Tokido fought back and managed to level the score at 2-2.

In the final game, Fujimura took the first round, but Tokido fought back again with this crazy offensive sequence resulting in a perfect.

With the score tied 2-2, and 1-1 in the final game, the tournament came down to one final round. Tokido got off to a great start, and had a huge life lead, but once again Fujimura managed to back him into the corner.

Two quick corner throws caught Tokido off guard, and Fujimura was able to end it with a simple air kunai for the win.

With his first-place finish at Fighter’s Spirit, Fujimura earned 200 CPT points, vaulting him into third place in the global leader boards with 1,295 points total.

SEE ALSO: The best fights at the Taipei Major 2019