These are all must-see highlights. 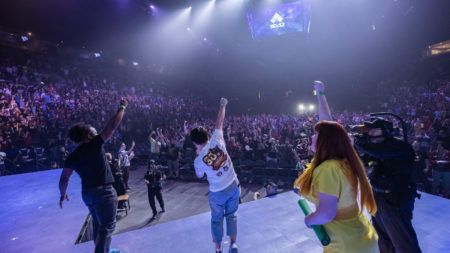 Masato “Bonchan” Takahashi’s dominating, Evo 2019 tournament win will definitely go down as one of the best performances in Street Fighter V history, but there were also over 1,950 other competitors who participated this weekend, with plenty of highlights between them. Here are the ones that caught our attention.

Bryant “Smug” Huggin was able to hit two quick combos against Hyungsuk “Verloren” Kong in the corner, followed by a perfectly timed anti-air which caused a stun and the end of the round. Smug only needed 18 seconds to completely erase Ibuki’s health bar.

In the next round, Verloren pulled off an amazing comeback win with a kunai projectile attack into a Critical Art.

Street Fighter fans were treated to an Evo 2010 grand final flashback match, when Daigo “The Beast” Umehara faced off against Ricki Ortiz.

Ricki was able to land a low kick into a Critical Art, but it wasn’t enough to end the match. In response, Daigo woke up with two low jabs and a Sonic Boom into a V-Trigger Flash Kick and then continued to clutch out the round.

Joe “MOV” Egami unveiled some Chun-Li tech against Benjamin “Problem-X” Simon. MOV threw out multiple V-Trigger guard break attacks that opened up Problem-X. MOV then ended the round with a sick 46-hit combo.

But on the third game, Problem-X pulled off an unbelievable cross-up setup with M. Bison’s V-Trigger command grab. With the command grab’s effect still active, Problem-X did a Somersault to the opposite side and released the V-Trigger. After that, he landed a clutch air target combo to finish the round.

Ryan Hart was one hit away from losing a game to Marcus “The Cool Kid 93” Redmond, but because of two quick Urien combos and a Critical Art, Ryan was able to pull off an incredible comeback.

The Zangief master is back! After an insane comeback win against Kensuke “Trashbox” Ishikawa, Hiroki “Kichipa-Mu” Asano continued his assault on Evo by landing three consecutive Spinning Piledrivers against one of the worlds best Street Fighter V players, Fujimura.

No one was going to stop Adel “Big Bird” Anouche from making it to the grand finals this year. Not even when he was just a hit away from losing a game to Masahiro “Machabo” Tominaga.

This year’s Evo Champion, Masato “Bonchan” Takahashi, showed everyone that he can win high-level matches with his Sagat.

Bonchan walked directly towards DC “Infexious” Coleman and faked the walk-up shimmy and landed a counter hit into a Critical Art.