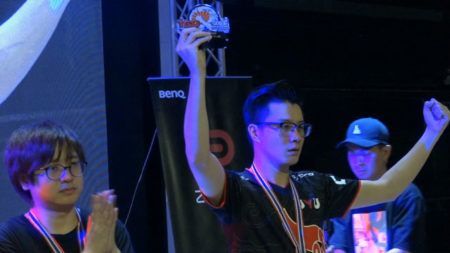 After third-place finishes at BAM11 and Fighter’s Spirit 2019, Li-Wei “Oil King” Lin has finally earned his first tournament victory of the year.

Fighting from the winners bracket, he faced Keita “Fuudo” Ai, another perpetual runner up in the grand finals.

Oil King looked unstoppable early on, racing out to an early 2-0 lead, and putting himself at tournament point.

But on the brink of elimination, Fuudo switched from his defensive playstyle Birdie, to an offense focused R. Mika.

The switch paid off for Fuudo, and the match turned into a crazy slugfest.

Fuudo was able to take the next three games in a row to reset the bracket as Oil King failed to adjust to the character switch.

In the second set, Oil King recovered and took the first game, but an incredible bait medium punch into a counter punish Critical Art caught Oil King off guard, and let Fuudo tie up a crucial game two.

Oil King took game 3, but Fuudo tied it up again by taking game 4. With the score now tied 2 – 2, Fuudo made a critical mistake by throwing a command grab way out of range and Oil King punished him hard.

In the next round, after getting hit by another Critical Art from Fuudo, Oil King finally defended properly on wake up and bested Fuudo with some beautiful mixups.

With his first-place finish at Thaiger Uppercut, Oil King earned 200 CPT points, which puts him in 9th place in the global leader boards with 560 points total.

READ MORE:This insane match between Sako and Yang Mian at Thaiger Uppercut had everything