Is Punk still the best Street Fighter V pro on the planet? 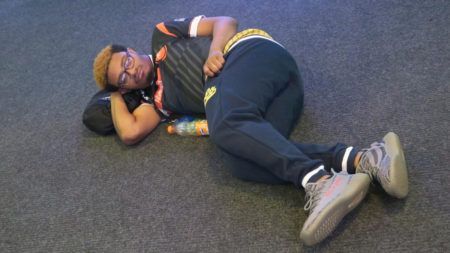 A few months ago, it was indisputable: Victor “Punk” Woodley was the best Street Fighter V player in the world.

For the first half of the year, Punk was unstoppable. He dominated the field at CPT Premier events Final Round, The Mixup, and Combo Breaker, and took second at the NorCal Regionals. At one point he had more CPT global points than the 2nd, 3rd, and 4th place players combined.

But after two early exits outside the top eight at both CEO and Game Over, Punk no longer looks invincible. Is he in a slump or has the rest of the field finally figured out how to beat him?

At CEO, Punk lost to Naoto “Sako” Sako, widely regarded as the best Menat in the world. Punk seemed unfamiliar with the matchup, and had a lot of trouble dealing with Sako’s V-Trigger.

In this next clip, he made a huge mistake by trying to V-Reversal while Menat had her V-Trigger activated, eating a huge combo that cost him the round.

He made another basic mistake in game three by attempting a risky jump-in on Sako, who had a full V-Trigger gauge ready. Menat can easily anti-air grab punish right after activation which leads into an easy orb set-up on wake-up.

Both of these mistakes are fundamentals of the Menat matchup that Punk should know. Any time Sako activated his V-Trigger, it was basically a free win for him, as Punk just had no answer, and didn’t know how to defend against it.

After losing to Sako, Punk then lost to Bryant “Smug” Huggin, which happened off-stream. Punk exited CEO with a disappointing 17th place finish.

Punk also struggled at last weekend’s Game Over. In day one pools, he lost to Hiromiki “Itabashi Zangief” Kumada’s Abigail 2-1. While Punk clearly knows this matchup much better, he showed signs of rust as he uncharacteristically dropped crucial, round ending combos.

On the verge of defeat, Punk bet it all on a wake-up EX-Dragon Punch, which Itabashi read and blocked easily. You can just sense the frustration in Punk as he pressed the pause button instead of letting the match finish.

Punk looked to get his revenge against Sako when they met in the top 16 of the lower bracket. After his loss the previous week, surely Punk would have learned the Menat matchup by now?

To the surprise of everyone, Punk picked Kolin instead of his usual main, Karin, which he probably thought was a better match-up against Menat. Sadly for Punk, the results were still the same, and he still had no ansewr for Sako’s V-Trigger attack.

After another crushing loss to Sako, and Punk was knocked out of the Game Over tournament tied in ninth place.

Is Punk still the favorite for Evo?

Punk has been the favorite for Evo all year, but his disappointing performances at CEO and Game Over may have exposed some holes in his game.

If he continues to have trouble with off-meta matchups, we could see more pros picking off-meta characters against him.

But Punk is a quick learner, and he is still one of, if not the best pro around when it comes to execution and in-game reactions. There’s still a month to go until Evo, so there’s time for Punk to plug the holes in his game.

For now, Punk is still the favorite, but it’s not as clearcut as it used to be.

SEE MORE: Tokido Celebrates his 33rd Birthday by crushing the competition at Game Over