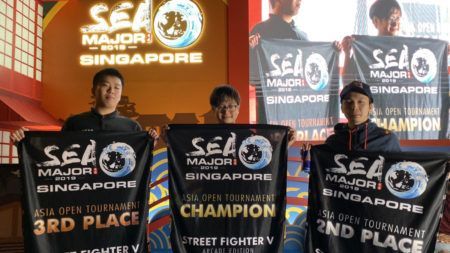 The tournament was stacked with the best players hailing from all over the Southeast Asian region, which included five out of the top ten players from the CPT global leaderboard.

Out of all the top contenders, it was reigning Capcom Cup champion, Kanamori “Gachikun” Tsunehiro who managed to put together an amazing performance in the lower bracket to earn a seat at the Grand Final to face Fuudo.

Fuudo made use of Birdie’s variety of normal attacks to stop Gachikun from gaining any momentum. Fuudo took the early lead by winning the first set.

Gachikun adjusted to a more measured approach and used Rashid’s projectiles to stay out of Fuudo’s range and won the following set.

Fuudo was often stuck in the corner against Gachikun, but as the match progressed, he became more familiar with Rashid’s punish ranges.

Gachikun’s second-round comeback wasn’t enough to win the set, and with him having to win two consecutive matches to be crowned champion, it was clear that Fuudo was playing with less pressure.

Fuudo reached tournament-point during the first round of the fourth set after an incredible whiff-punish. But Gachikun was able to pull off two clutch rounds to even up the set, 2-2.

Gachikun secured the first round of the final set by spending all his meter and winning via chip damage. In the last two rounds, Fuudo clutched out both wins with Critical Art finishes and won a hard-fought 3-2 match.

For his first-place finish at SEA Major 2019, Fuudo earned US$7,000 and 700 Capcom Pro Tour points, moving him up to fourth-place on the Global Leaderboard, finishing with 2,160 total CPT points.

SEE ALSO: Xian defeats Bonchan in a crazy match at the SEA Major