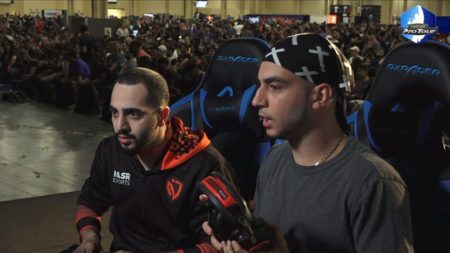 Day 1 of Evo 2019 has begun, and some of the best Street Fighter V players around the world have started displaying their talents on the Capcom Fighters Twitch channel, which has already streamed 13 hours of non-stop action.

Right from the start, both players set an intense pace, laying the groundwork for a thrilling match.

High-level Street Fighter V was on full display with both players landing key whiff punishes, but Chris T was able to edge out Angry Bird in the first round by blocking a wakeup Critical Art.

In the following set, Chris T looked to make quick work of Angry Bird as he finished the round with a perfect.

Angry Bird adjusted with a more aggressive approach and earned two dominating rounds against Chris T which evened out the score, 1-1.

Angry Bird was on the verge of winning the set as he landed a tricky aerial EX cross-up attack.

With his back against the wall, Chris T clutched out the round by doing a neutral jump, which went over Zeku’s slide, and landed a Critical Art to take their match to a final round.

At the start of the final round, Angry Bird looked poised to take the round by taking a significant life lead early, but Chris T was able to fight out of the corner and edge out Angry Bird.

Both men are still in contention as they both advanced to Pool I609, with Angry Bird in the lower bracket.