There were four perfect rounds! 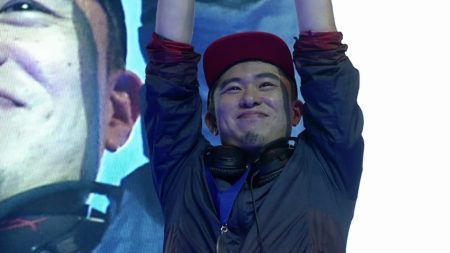 After coming so close in 2014, Masato “Bonchan” Takahashi has finally won his first Evo title.

After an unprecedented number of upsets on day two of the tournament, Bonchan breezed through the wide-open upper bracket, defeating Derek “iDom” Ruffin and DC “Infexious” Coleman to reach the grand finals.

Meanwhile, Big Bird had a much tougher path through the lower bracket, where he had to face ChaoZhou “Yang Mian” Huang, Masahiro “Machabo” Tominaga, and Fujimura “Fujimura” Atsushi, just to reach the losers finals.

In the losers finals, Big Bird make quick work of Infexious, winning 3-0 to make it to the grand finals.

Big Bird got off to a quick start, landing multiple whiff punishes and earning himself a perfect on the very first round.

Bonchan was able to recover and took the second round, but Big Bird was able to close out the third round by trapping Bonchan in the corner and baiting out an EX-Ressenha, which he easily punished to take the first game.

Big Bird kept the pressure up and took another perfect round to start off game two.

Another bait and counterattack from Big Bird let him easily take the second round, putting him just one game away from the reset.

Bonchan finally woke up at the start of the third game and won two convincing rounds to take game three.

In game four, with Big Bird one round away from the reset, and Bonchan looking to tie up the score, Bonchan raised his game again, earning himself another perfect round with some perfectly timed counter hits and a beautiful shimmy to dodge the throw at the end.

With all the momentum on Bonchan’s side, he earned another perfect round to start game five, pinning Big Bird in the corner with no hope of escape.

Big Bird was finally able to mount some offense in round two, and this time managed to escape the corner with a wall jump, trading places with Bonchan and finishing him off with a dash in throw.

With the score tied 2-2, and the final game tied 1-1, everything was on the line in this final round.

Both men put together a spectacular final round, with Big Bird taking an early lead and trapping Bonchan in the corner. But with only half his life remaining, Bonchan turned the tables on Big Bird and pushed him into the opposing corner, landing a massive combo, stun, and reset that left Big Bird with just a pixel of life left.

In response, Big Bird was able to land a wake-up low kick and hit confirmed it into a huge Critical Art, but it wasn’t enough to finish the round.

With both fighters at full screen, Big Bird decided to go for a V-Trigger set-up, but Bonchan picked the right wake-up option and neutral jumped over Big Bird’s dive kick, landing his own jump kick on the way down to finish the game, taking a 3-2 victory, and winning his first Evo title.

For his first-place finish at Evo 2019, Bonchan earned a massive 1,000 Capcom Pro Tour points and US$31,700. Bonchan is now in second place in the global leaderboard with 3,070 CPT points.