Big Bird took home US$14,000 this weekend and secured his spot at the Capcom Cup. 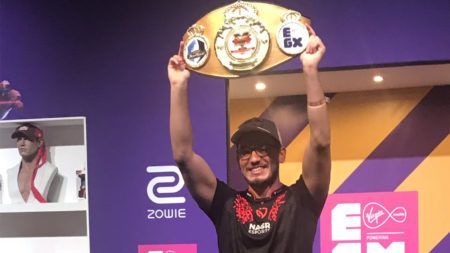 It was complete and total domination by Adel “Big Bird” Anouche this weekend at EGX 2019, as he became a back-to-back champion, winning the EU Regional Open tournament on Saturday, and the EU Regional Finals on Sunday.

After the conclusion of the EU Regional Open on Saturday, the focus shifted to the CPT EU Regional Finals on Sunday, where the top eight players on the CPT European leaderboard competed against each other for US$7,000 and a guaranteed spot at this year’s Capcom Cup.

In the grand finals, Big Bird faced British pro, DC “Infexious” Coleman, in a rematch of the Evo 2019 losers final.

Infexious was on a roll after a dominant run through the lower bracket, which included a huge 3-1 victory over fellow Brit and 2018 Evo champ, Benjamin “Problem X” Simon in the losers finals.

However, in the second game, Big Bird managed to trap Infexious in the corner, and was able to pile on the pressure to take two quick rounds, which included a beautiful hit confirm into Critical Art to end game two.

Game three played out the same way, with Big Bird trapping Infexious in the corner again, and ending round one with a perfect.

While Infexious was able to take round two, Big Bird dominated round three, and again had Infexious in the corner, leading to yet another Critical Art finish.

Infexious did his best to stay out of the corner in game four, and managed to take the first round with some impressive aerial acrobatics.

However, round two went right back to Big Bird bullying him in the corner, and he just couldn’t escape Rashid’s superior ground game and anti-air options.

At tournament point, Big Bird again had Infexious trapped, and closed out the game with another stylish Critical Art finish.

Big Bird — who ranks sixth on the CPT global leaderboard — is already guaranteed a spot at the Capcom Cup, but his direct invite will now open up a qualifying spot to one of the lower-ranked players.