Team USA moves onto the grand finals where they’ll face either France or China. 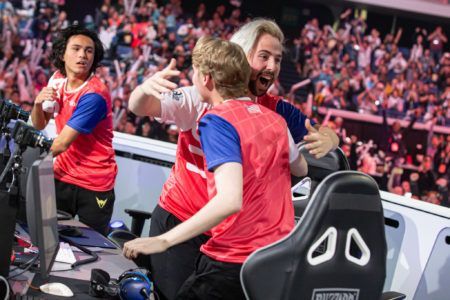 After three years of domination, three gold medal finishes, and not a single defeat, South Korea has finally fallen at the Overwatch World Cup.

Team USA got off to a fantastic start, taking early control of the first round and never letting up, thanks to some big plays from Sinatraa on Doomfist.

However, South Korea wouldn’t go down without a fight and took a tightly contested round two, before completely crushing USA in round three to take the early series lead.

On Hollywood, South Korea were on attack first, and ran a pretty standard Mei, Reaper, Orisa, Sigma, Lucio, Moira comp. USA had a similar comp, but with Doomfist instead of Mei.

While South Korea took Point A fairly easily, they struggled in the streets phase, with Sinatraa’s Doomfist again causing them a lot of trouble, and ultimately they were unable to reach the second checkpoint.

On USA’s attack, they struggled to cap Point A thanks to some excellent Mei play from Hyojong “Haksal” Kim.

However, once they were finally able to get the payload moving, there was no stopping them. This time it was Corey’s chance to shine, and he ended up racking up a 20+ killstreak on Reaper by the time USA had pushed the cart to victory, tying up the score at 1-1.

On Gibraltar, both teams managed to complete their first attack runs, but South Korea were in a much better position, with over two minutes left on the clock, while USA needed overtime to finish.

However, USA made the most of their one minute on attack, and amazingly kept the payload rolling through the first checkpoint in overtime.

Against all the odds, they managed to do it again, thanks to a huge Death Blossom from Corey, making it through the hangar and onto the second checkpoint, known to be one of the toughest points to attack in all of Overwatch.

Team USA were finally forced off the payload, but with the score at 5-3, South Korea had a steep task ahead of them, even with their three minutes of attack time.

South Korea struggled on their attack and ultimately couldn’t even take the first checkpoint, thanks to some beautiful Sigma play from Indy “SPACE” Halpern and Corey again cleaning up on Reaper.

With USA up 2-1 and sitting at match point they looked to finish off South Korea on Horizon. However, South Korea are known for being practically invincible on Assault maps and proved their strength with their first attack, taking both points fairly easily, thanks to a massive Dragonstrike from Jae-hyeok “Carpe” Lee.

On their own attack, USA struggled against South Korea’s formidable defense, however, they were finally able to cap Point A in overtime. Following which, they then managed to snowball Point B, and took it fairly quickly thanks once again to a massive Death Blossom from Corey, leaving them with one minute left on the clock, just 11 seconds less than South Korea’s time.

With just one minute to attack, USA decided to pull out a cheese strat, running Symmetra, Bastion, Sigma, Orisa, Moira, and Lucio and teleporting directly onto the point. South Korea were caught out by the surprise strat and USA managed to cap Point A in record time.

However, with less than a minute left, they were unable to make any progress on B.

On South Korea’s attack, they attempted a similar Symmetra teleport strat, but immediately went back to spawn and changed when they saw USA’s bunker comp with Corey on Bastion.

However, Corey made an uncharacteristic mistake and ended up getting Halted by Dong-gyu “Mano” Kim’s Orisa off the high ground, leading to South Korea taking Point A.

However, South Korea were unable to get the one tick they needed on Point B and Horizon ended in a draw with the score still 2-1 to Team USA.

It seemed like South Korea didn’t know how to respond, and USA practically walked onto the point, taking control without much of a fight.

South Korea didn’t have an answer for USA’s comp, and were unable to flip the point until 99%, however, team USA were able to take it right back and won round one.

USA went with a more standard comp on round two, with Corey back on Reaper and Sinatraa on Doomfist. The change in comp didn’t make a difference however, and USA easily took control, with South Korea looking lost in team fights.

South Korea finally managed to flip the point at 97% thanks to some late-game heroics from Minho “Architect” Park on Doomfist.

But it wasn’t enough, as USA came right back and wiped Korea on the very next fight, thanks once again to another huge Death Blossom from Corey.

With South Korea dead, USA flipped the point back over, and South Korea were unable to make it back in time to contest.

With their triumphant victory, Team USA now moves on to the grand finals of the Overwatch World Cup for the first time, where they’ll face China.