And she can use their ult multiple times. 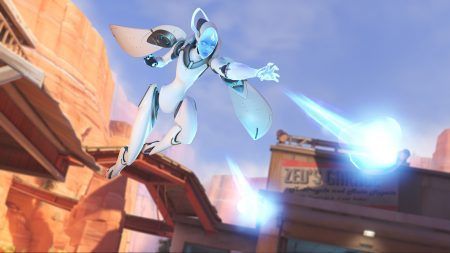 Echo is the newest hero to join the ranks of Overwatch. Yesterday, Blizzard released her origin story, revealing her as the A.I. creation of deceased Overwatch founder, Dr. Mina Liao.

Today, a developer update has revealed her full range of abilities including her absolutely insane ult.

Echo is a Damage Hero with 200HP. Unlike other omnics, she has no shields or armor.

Echo’s main attack fires a trio of projectiles from her hand. Each projectile deals 17 damage, for a total of 51 per shot. They travel at 75m/s, putting them inbetween Genji’s shurikens and Zenyatta’s orbs in speed. They can headshot and have no damage fall off or drop. She can fire three shots per second, and she has 15 ammo (five shots before reloading).

Echo’s first ability throws out six small bombs that stick to surfaces or targets. Each bomb detonates exactly one second after sticking for 30 damage with a 2m explosion radius. The impact of the bomb hitting also deals an additional 5 damage. 6-second cooldown.

These bombs are effectively mini tracer pulse bombs. They’re easy to land on tanks, or if you can get all six to land on a 200HP heroes (McCree and Pharah are your best bet due to their larger models) it will one-shot them.

Focusing Beam is a high-risk, high-reward ability. Echo doesn’t really have any escapes so getting within 20m is quite dangerous, but if you can catch a non-tank hero at half health, it will literally melt them in half a second. It also works on barriers, which will likely make Echo one of the best barrier breakers in the game.

Flight is basically an improved version of Pharah’s jet pack. Echo surges forward quickly, and then flies freely for three seconds. Air control is very similar to Mercy when she ults. 6-second cooldown.

Glide is very similar to Mercy’s Passive and allows Echo to quickly float through the air after her Flight ability runs out.

Echo transforms into a member of the opposing team, gaining use of all of their abilities for 15 seconds. She also gains their HP/armor and has massively increased ult charge.

Echo’s ult is extremely powerful. She turns into the targeted enemy and gets a full heal at the same time. She also has 6.5x ultimate charge for the duration of the ult, which means she can use their ult multiple times. In fact, she has enough time to get Tracer’s ult seven times.

For characters like Reinhardt, Zarya, and Sombra, this could be absolutely game-breaking. When the ult runs out or she’s killed in her transformed form, she will go back to Echo form with full health.

From what we’ve seen so far, the only way to stop Echo from absolutely destroying your team whenever she has ult is by hacking her after she’s transformed, which prevents her from using her abilities. Having said that, hack only lasts five seconds, and her ult lasts 15 seconds, so you need to kill her before it ends.

Incidentally, when she’s transforming into her chosen target, she is immune to all stuns and damage, so you can’t even stop it that way.

Echo’s kit looks incredibly powerful and overtuned right now. She has great mobility, high damage, and probably the most powerful ult in the game. Her only drawbacks are her fairly large model, and her lack of defensive cooldowns.

I’ll be very surprised if Echo reaches the live servers in her current state. Her ult especially feels too strong right now. If she’s killed in her transformed form, she should probably just die, rather than go back to Echo form with full health. The ult charge she gets when transformed is a little too strong too.

Echo is available on the PC PTR now. No official release date has been announced yet.

You can watch the full developer update here: