This is Overwatch’s first new map type since launch. 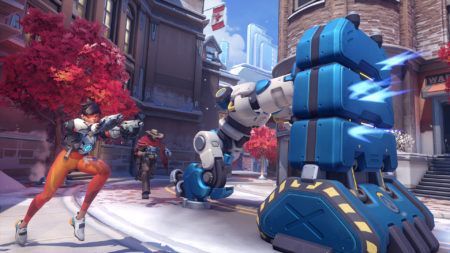 After trying out Overwatch 2’s new PvE Story Mission yesterday, today I had a chance to play the new PvP map type, Push.

First of all, just to clarify, you do not need to buy Overwatch 2 to play Push. All of Overwatch 2’s PvP maps and heroes will be available to original Overwatch players, free of charge.

Toronto is the first Push map, and is set in the snowy downtown streets of the Canadian city, which features an interesting blend of old-looking brick buildings and new, high-tech shopfronts.

And of course, because it’s Canada, there’s a huge statue of a hockey player right in the middle of the map.

The map is essentially a symmetrical Escort map, with each team having a winding set of streets to navigate, each with two checkpoints. There are lots of high ground spots overlooking the payload route, although the street itself is fairly wide. It reminds me quite a bit of Venice.

Right in the middle of the map is a solitary robot, who doesn’t appear to have an in-game name, so I’m going to call him “Pushy Pete”.

Interestingly, the game announcer for Toronto appears to be Pete himself, who has a deep monotone robotic voice, in total contrast to the sweet tones of the usual game announcer, Athena.

At the start of the game, both teams rush to the middle and fight for control over Pete. Like a Control map, he unlocks after 30 seconds.

It’s important to note that both teams have their own payloads to push. It’s not a tug-of-war style game where there’s only one payload that moves back and forth.

As long as you maintain control over Pete he will push the payload. However, like an Escort map, at least one player on your team needs to be standing next to him at all times to make sure he keeps pushing, otherwise, he will do nothing because, like I said, he’s a lazy bum. As far as I can tell, he does push faster when more people stand near him, just like Escort.

If you lose control of Pete, and the other team reclaims him he will march back to the middle of the map and over to their payload to start pushing it. He actually walks back to the middle much faster, since he doesn’t have to push the payload on his stroll back.

At the top of the screen, there’s a handy progress meter that shows who has control over Pete (colored blue or red), whether he’s pushing or standing around, as well as the distance he has pushed each payload, and who’s leading.

Like Escort, your team’s payload will start to roll back after not being pushed for a while. Fortunately, there’s a halfway checkpoint, so if you can reach that, it won’t fall back any further than that.

The winning team is the one that manages to push their payload all the way into the enemy team’s base, or the one with the furthest progress when the 8-minute timer expires.

I played two games of Push and both times, neither team managed to Push the payload the entire distance.

As you’re pushing the payload into the enemy base, it gets closer and closer to their spawn and further from yours, making it harder to finish (much like the end of a traditional Escort map). Furthermore, since only Pete can push the payload, it’s really hard to get him to push the last 10 meters or so, as not only do you have to regain control of him, you have to walk him all the way back to your payload.

Overall, I really liked Push, and it feels like a great mix of Escort and Control, my two favorite map types. I like the objective-driven gameplay of Escort, and I like symmetrical maps where neither team is considered Attackers or Defenders, so this is a great way to combine both.

The second game I played had both teams within 10 meters of finishing, so it was interesting having to transition between defense and attack so quickly, as my team tried to stall their team from finishing, and then immediately went on the counterattack by walking Pete all the way over to their base.

It feels like there could be a lot of strategy involved with how you transition from attack to defense and vice-versa on Push, and I’m really looking forward to seeing what the pros do with it in the Overwatch League.