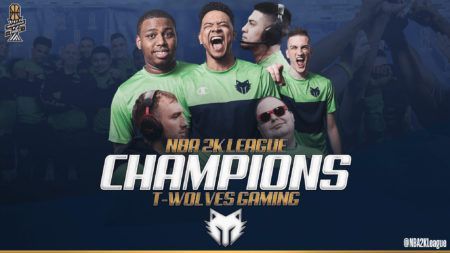 The hard-earned title win capped off an incredible season for the first-year team from Minneapolis. Behind the skillful exploits of rising star Michael “BearDaBeast” Key, T-Wolves Gaming rallied from a 3-6 start to the season to cement its place in NBA 2K League history. The squad now owns the distinction of being the first expansion team to win the league championship.

Game 3 saw the momentum swinging back to the T-Wolves’ side, racing to a 10-0 start. Due to technical difficulties, the game was reset from tip-off — with the scoreboard set back to zero apiece — but that didn’t throw the boys from Minnesota off their game.

Despite a more competitive battle, the T-Wolves took Game 3, 56-40.

Game 4 was an exhilirating, down-to-the-wire battle that saw the Philly squad eke out a 53-46 victory. The game also featured the matchup everyone had been anticipating — BearDaBeast going head-to-head against 76ers GC point guard Ethan “Radiant” White.

Radiant took this round with a 24-point, 10-assist effort that kept the confetti from falling in favor of the T-Wolves.

The deciding game was a defensive battle starting from tipoff, which saw the T-Wolves just up by seven points, 20-13, after a low-scoring first half.

T-Wolves Gaming wrestled control in the second half, blowing the game wide open at the start of the 4th quarter with a 12-0 run. At the sound of the final buzzer, T-Wolves Gaming lorded over 76ers GC with a 52-35 result.

Not only did T-Wolves Gaming earn its place in the annals of NBA 2K League history, the squad also won US$360,000 from the total prize pool of US$720,000. Not a bad haul for first-timers.