This was by far the best matchup of the tournament so far. 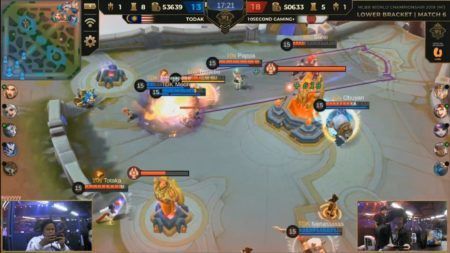 The match was closely contested throughout, and will likely go down as one of the tournament’s most memorable series.

Here’s how it went down:

In the first clash, the teams demonstrated opposing strategies with 10second Gaming+ pushing for side lanes while Todak prioritized racking up their kill count.

Todak tried to take advantage of the Japanese squad’s marksman-less lineup, but 10second Gaming+ Plus played exceptional defense every time the Malaysians initiated a skirmish.

Something had to give, however, and with Todak’s Eoneeeee and Nenassssss’ using Grock and Valir to provide support to the offensive attacks of Moonnnnnn’s Chang’e and Cikuuuuuu’s Granger, cracks began to form on 10second Gaming+’s defensive stance.

At the 14-minute mark, Todak split the 10second Gaming+ defense by drawing two Japanese players toward the Lord. Meanwhile, the team pushed hard toward the base with a four-man attack. Todak overpowered 10second Gaming+’s remaining three defenders to take control of the game. and the Malaysians clinched the win a minute later as they added a Lord for their final attack.

Game two turned into a slugfest, with the back-and-forth affair stretching to a whopping 30 minutes as the competing teams masterfully executed their strategies.

This time around, it was the Malaysian side that pushed to attack turrets, while the Japanese squad initiated team fights.

10second Gaming+ once again showed outstanding defense to ward off any Todak charge, keeping the Malaysian squad at bay as they attack around the 14th and 20th minutes of the game.

By the 22nd minute, players from both sides had maxed out the levels of their chosen heroes, and both squads engaged in team fights imbued with Immortality. At this point, it was a waiting game to see which side would slip up first, as both teams continued to keep pace with each other.

With their greatest threat eliminated and Todak caught off guard, the Japanese squad pushed toward the enemy base and completed a wipe a minute later, taking the thrilling game two win.

The final, deciding game of this best-of-three series carried the same intensity and competitiveness from the previous games.

Again, each team brought distinct approaches for their campaign — with 10second Gaming+ going with a two-tank lineup, while Todak rolled with a two-marksman setup.

Eoneeeeee’s Kimmy and Nenassssss’ Granger gave Todak a formidable roster that gave the Japanese squad a challenge early on. But 10second Gaming+’s combination of Surei’s Gatotkaca and Totaka’s Lolita gave them a solid defensive line that weathered each Todak advance.

Midway through minute 17, Todak charged with a level 2 Lord, but even that offensive was stunted by the impeccable 10second Gaming+ defense.

Momentum swung back and forth between the two teams. However, approaching the 21-minute mark, Todak made the critical adjustment, taking a divide-and-conquer approach to pick off 10second Gaming+’s heroes one at a time. With a level 3 Lord at their command, Todak nearly wiped out the opposing team, claiming the epic comeback and securing the series-clinching win.

Todak will face off against the Burmese Ghouls next. The winner of that matchup will play in tomorrow’s Lower Bracket Finals, going up against the loser of the ongoing RRQ and Evos Legends’ Upper Bracket match.