Can anyone stop them? 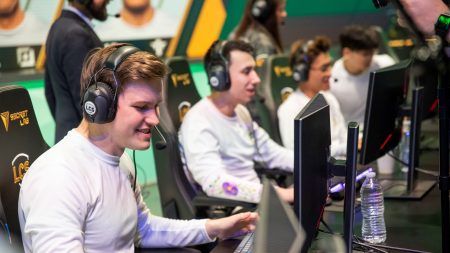 Despite entering the bracket as the third seed, FlyQuest has been the story of the LCS playoffs.

After defeating Evil Geniuses and Spring champs Cloud9, Tristan “PowerOfEvil” Schrage and his crew went up against Team Liquid.

Even with TL’s new and improved team dynamic, FlyQuest managed to subvert expectations and defeat the top seed in the best-of-five Winner’s Final.

The opening game was a lengthy back-and-forth between the two teams. From skirmishes to drakes, FlyQuest and TL merely passed around the 1,000 gold lead throughout the minutes.

FlyQuest eventually made some ground by claiming the Infernal Drake. While TL is now locked out at two drakes, they cleaned up the dragon pit nicely, claiming critical kills on Lucas “Santorin” Larsen’s Sett, Tristan “PowerOfEvil” Schrage’s Azir, and Lee “Ignar” Dong-geun’s Thresh.

With extra damage coming from Infernal Soul, FlyQuest was hardly contested in team-wide clashes. Santorin and his squad easily took Baron and the Elder Dragon with ease and slowly pushed up into TL’s Nexus by taking out the mid and bot inhibitors.

By the 45-minute mark, FlyQuest initiated the final clash inside their opponent’s base. While the Nexus turrets were an easy task for FLY, but TL’s sudden assault with Edward “Tactical” Ra’s Ashe getting a double-kill left PowerOfEvil’s Azir in a dangerous 1v2.

With game one being a drawn-out match, Team Liquid opted to fast-track their way to a win. The team focused into fully optimizing their bot-lane of Tactical’s Caitlyn and Jo “CoreJJ” Yong-in’s Lux as their kill-making duo.

Jason “WildTurtle” Tran’s Ashe tried to close in on Broxah’s Volibear, but CoreJJ’s Lux burned through some of FLY with Last Spark. Santorin’s Kha’Zix was a sneaky assassin that rushed TL’s main carries, initially ending the engage, but Colin “Solo” Earnest got greedy and chased down the retreating champions.

With a quick turn, Tactical’s Caitlyn dealt some heavy crit damage and took a thrifty double-kill with the help of Broxah.

With only one alive on the side of FlyQuest, the rest of TL stormed through the mid-lane and destroyed their first Nexus of the series.

While his Azir barely made an impact in the last game due to Nicolaj “Jensen” Jensen’s Orianna, PowerofEvil stuck to the Emperor of the Sands and finally made some big plays with his ultimate.

Though IgNar’s Thresh was able to get a hook on Broxah’s Lee-Sin, he easily escaped with a Safeguard, to his near allies. Not wasting the attack, PowerOfEvil dove straight into the trio and launched them up with a deadly Emperor’s Charge, racking up three more kills for their side.

The game-ending moment occurred when Impact’s Mordekaiser was singled out from a scouting position. With FlyQuest dogpiling him in the jungle, Santorin’s Volibear got the killing blow with a dunking Stormbringer. The 4v5 advantage gave way for FLY to pick off more champs in the siege and take the lead with a game three win.

Despite starting off strong with two drakes and a few kills on the board, Team Liquid slowly lost the lead to FlyQuest due to some unfortunate skirmishes and plays. PowerOfEvil and his crew tied their drakes up and even took a Baron for an easy takedown of TL’s mid and bot inhibitors, but as they inched closer to the Nexus, Tactical stood as the TL’s final gatekeeper.

With just one simple retaliation, Tactical’s Kalista showered his opponents with spears. Starting off with some standard kiting hits on IgNar’s Braum, the ADC player instantly flashed out of Santorin’s Evelynn charm and pierced his opponents further with his auto-attacks, earning a massive triple-kill and ace to save their base.

With the amazing ace in the base by Tactical, TL suddenly matched FLY in gold and map dominance. Once they picked off a few members, Tactical and his squad marched down the mid-lane and focused on the base structures and the Nexus before their opponent could recuperate for another clash.

As the final game of the series, both teams played on the safer side of things, opting out of single-lane pushes and over-extensions. With FlyQuest on the blue side, they did their best to play around the drakes, forcing a steal or a kill or two on the enemy team.

In one significant encounter, Santorin’s Graves managed to steal the Infernal drake and delete opposing jungler Broxah, but he immediately fell to one of Jensen’s sand soldiers. Even on trades, PowerOfEvil’s teleporting Syndra came as a second wind to the fight, easily securing stuns onto TL’s remaining fighters and racking up three more kills for FlyQuest.

As FLY steadily dominated with inhibitor pushes, a Baron buff, and an four-stack Infernal Soul, WildTurtle’s Jhin initiated a zoning Curtain Call to secure another inhibitor and an entryway for the team-wide invasion.

PowerOfEvil’s Syndra led the charge and easily pulled Jensen’s Azir out of the team fight. With TL barely being able to defend in the 4v5, FlyQuest chased down the remaining enemy champions and ended the long series with a triumphant ace.

With the Winner’s Final victory, FlyQuest will continue their perfect standing into the grand final. The team will also qualify for the Worlds 2020 Group Stage, which will be their first-ever Worlds appearance in franchise history.

Team Liquid will now move down to the Lower Bracket Final and face rivals TSM on September 6, 4 a.m. (GMT+8:00).