Ex-Griffin jungler, Tarzan, is heading to the LPL

The Griffin star is taking his talents to China. 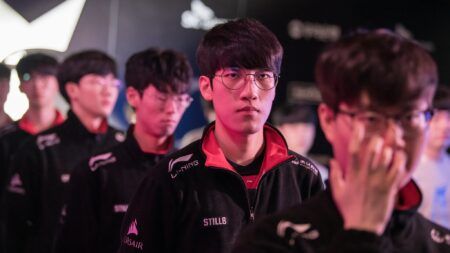 Talented young jungler, Lee “Tarzan” Seung-yong, has recently announced that he will be playing in China’s League of Legends Pro League (LPL) next year.

“To take on a new challenge and improve myself, I have decided to play in the LPL league from 2021,” stated Tarzan in Korizon’s translation. “I don’t know how many times I rewrote this sentence, so I hope my determination and sincerity are well delivered.”

While there are no details yet on which team he will join, Tarzan confirmed that he will be stepping away from streaming to focus on practice. As for his stream earnings, Tarzan wanted to “express his gratefulness” and made a generous donation of KRW 5M (US$ 4,400) to the Green Umbrella Children’s Foundation.

Tarzan started his professional career with LCK team Griffin in 2017. With its short-lived success as a top LCK and Worlds contender in 2019, the team started to crumble due to internal issues, losing key players like Choi “Doran” Hyeon-joon and Jeong “Chovy” Ji-hoon.

While Tarzan and a few other notable teammates stayed in the organization, Griffin experienced a drastic dip in performance in 2020 LCK Spring, finishing last with a 5-13 record. Though the team had a chance to return to the premier league with the LCK 2020 Summer Promotion, Griffin lost their chances with a 2-0 sweep by fellow LCK team SANDBOX Gaming.

With an imminent relegation into Challenger’s Korea, Tarzan along with Kim “Wadid” Bae-in decided to leave the team in May. While Wadid turned into color-casting for the LCK English broadcast, Tarzan moved into streaming.

Though the 2020 season may be a quiet one for the world-class jungler, his new venture into the LPL could spell some success for him. While it may be a new scene for him, the LPL is populated with talented Koreans like IG’s Song “Rookie” Eui-jin and his former teammate, JDG’s Seo “Kanavi” Jin-hyeok.

If Tarzan is able to find a proper home in one of the LPL teams, he’ll soon become a top contender in both the domestic and international settings.