It was a rematch of the LCK Summer Finals. 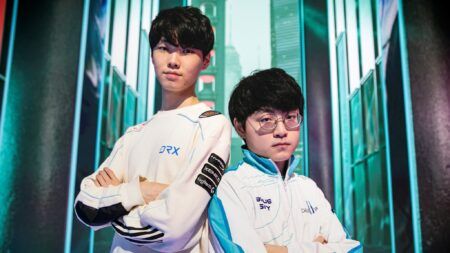 The League of Legends World Championship (Worlds) has entered its knockout stage with some regional favorites clashing in the mix.

The first series was an LCK Summer Final rematch between DRX and DAMWON Gaming. While DAMWON finished first (5-1) in their group with only one loss to JD Gaming, DRX struggled to dismantle TOP Esports in both their games, taking the second seed with a 4-2 record.

The quarterfinal ended up being a repeat of the LCK Summer Final, with DAMWON once again securing a 3-0 sweep.

Despite being a do-or-die set-up in the Worlds quarter-finals, both LCK teams played their usual style of slower-paced gameplay and reliance on farming and specific map objectives. DAMWON managed to take first blood with ShowMaker’s Syndra and even followed it up with an insane flash-Zenith Blade stun by Cho “BeryL” Geon-hee.

With DRX running a poking composition with Caitlyn and Lulu, the team barely had any engage opportunities to counter DAMWON’s constant split-pushing. With no tankier champions other than Choi “Doran” Hyeon-joon’s Jayce, the team fell through in map control and conceded the Infernal soul, the Elder Dragon, and the Baron to DWG.

After the successful skirmish against DRX for the Elder Dragon, DWG went full force into their opponent’s base. Destroying all of DRX’s inhibitors, it was only a matter of time for DAMWON to close out the game. With the first win of the series, DWG add another win to their perfect blue-side record since the 2020 Mid-Season Cup.

Now on the blue side, DRX opted to play safer and intercept DAMWON’s bigger team plays. In just one skirmish around the red buff, DRX was able to engage on all fronts and outplay their opponents. Despite Jang “Nuguri” Ha-gwon’s insane four-man knock-up, Doran’s Jax stunned and whacked his way into DWG’s back-line. The Jax player eventually fell to ShowMaker’s Twisted Fate, but DRX immediately went for the re-engage to pick up three more kills for their side.

While things were finally looking up for DRX, DAMWON stayed strong during the toughest team fights. In one mid-lane clash that spelled success for Jeong “Chovy” Ji-hoon and the rest of DRX, the DWG squad dared to avenge their fallen support.

With health bars already running low, ShowMaker flashed in and got the stun on Kim “Deft” Hyuk-kyu with his golden card. While Ryu “Keria” Min-seok devoured him to increase the distance, DAMWON went all-in with a two-man Ornn knock-up followed by TF’s flanking Destiny. While Chovy tried to null their advance with a Hero’s Entrance, the remaining DWG players crowded around him for another kill.

DAMWON got the upper hand once again with a beautiful flash-gold card stun by ShowMaker on Hong “Pyosik” Chang-hyeon’s Kindred. With the rest of DWG just right behind, the team easily took down Pyosik and Chovy and sieged the base through the mid-lane. With only three left to defend, DAMWON quickly overpowered the remaining defenders and grabbed their second win of the series.

As the possible final game of the series, DRX did their best to draft a scaling composition with Vladmir and Vel’Koz. While the team had success in taking 2v1 kills and smaller skirmishes in the early game, their advances became riskier and were prone to a good punish by DAMWON.

In Pyosik and Keria’s efforts to steal Kim “Canyon” Geon-bu’s blue buff, Jang “Ghost” Yong-jun’s Ashe instantly locked them up with an Enchanted Crystal Arrow and ShowMaker came in to deal some solid damage with his Shockwave.

While the duo took down the two invaders, Canyon and Nuguri also double-teamed Chovy for another kill, completely stopping DRX’s chances to farm out the game.

With DAMWON racking up kills, taking the Baron, and earning a 8K gold lead, the team looked unstoppable by the 24-minute period. In an impressive split-attack in separate jungles, Ghost and ShowMaker teamed up once again to take out the lone Doran while Canyon’s Kindred instantly blew up Deft’s Senna from the bush.

Even with DRX trying to escape through their own jungle, BeryL came through with the pinpoint Grand Skyfall and secured the game-winning ace onf Chovy’s Vel’Koz. By the end, DAMWON simply outclassed their LCK rivals and stormed the base for the well-deserved sweep.

With the quarterfinal win, DAMWON Gaming advances to the semifinals and will face the winner of G2 Esports vs. Gen.G on October 25, 6 p.m. (GMT+8)

READ MORE: DRX’s Chovy on DAMWON: “I want to take them down”