Be the baddest with this official K/DA lightstick 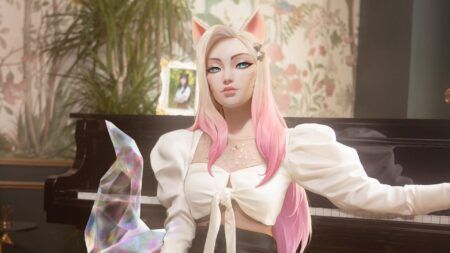 The K/DA lightstick is fashioned after a stage microphone, featuring a black criss-cross pattern in its handle. The top part of the lightstick has a heart encased inside a clear plastic diamond, which can, later on, be triggered to glow. It also comes with a strap that has the classic “KDA” text logo printed on it.

The lightstick’s box looks very premium as well, similar to the packaging of other K-pop fandom lightsticks like BTS and Monsta X. Purchasing the K/DA lightstick comes with an official BLADES membership card to show off to your co-K/DA fans.

This K/DA lightstick is priced at US$40 and can be pre-ordered at the Riot Games merch store. Its estimated shipping date is on December 31, and while fans won’t be able to use it during K/DA’s Worlds 2020 performance, they can always use it while jiving to the group’s songs Pop/Stars and The Baddest.

Additionally, K/DA has started its first fan recruitment for all BLADES, the group’s official fandom name. It will run for about a month, starting this September 27 and ending on October 31.